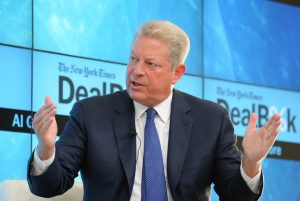 Gore suggested that the war in Syria was caused by ‘climate refugees’ flooding into the cities. This, in turn, by Gore’s version of events at least, kickstarted the wider refugee crisis – eventually leading Brits to vote out last June. Here’s what Gore told the New European:

‘Long before the civil war in Syria began from 2006 to 2010 80% of livestock were killed by the drought, 60% of farms were destroyed, 1.5 million climate refugees were driven into their cities where they collided with another 1.5 million from the Iraq War… And soon thereafter the civil war – which had other causes as well – erupted and opened the gates of hell, and the refugee crisis, which also had other causes, began to shake the foundations of the European experiment.

Of course there were many causes of Brexit, but one of them was this, and the most powerful ad in the campaign was that billboard showing the endless lines of refugees at the borders of Europe with the implicit message ‘do you want them coming here?’

It’s quite a theory. But Mr S isn’t sure he buys it. Firstly, it’s debatable whether Nigel Farage’s poster actually had that much of an impact: it was unveiled on the same day as the tragic murder of Jo Cox, meaning that many newspapers simply ignored it the next day. If anything, the poster might have actually put people off backing Brexit.  Secondly, many of the migrants making their way to Europe at the height of the crisis weren’t from Syria: with hundreds of thousands arriving from Afghanistan, Iraq and Eritrea.

Still, any excuse for Gore to blame something on climate change…