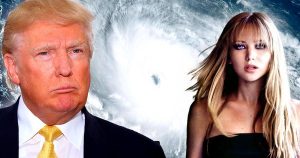 “Oscar-winning actress Jennifer Lawrence suggested the devastating hurricanes in Texas and approaching Florida were signs of “Mother Nature’s rage and wrath” at America for electing Donald Trump and not believing in man-made climate change. …It’s scary,” the actress responded to the interviewer’s assertion that there was “an end-of-days feeling” across the world and especially in the U.S.”- Source

First and foremost, Jennifer Lawrence is a very well paid professional liar. And no, I am not being sarcastic. It’s the basic definition of what an actor is. Every actor in Hollywood literally makes their living by lying to people on camera. And as we also know, Hollywood has been pushing the Vatican’s leftist view for years. The fact the most popular film making entity is named “Universal” should tell you something. The Latin term “Catholic” is translated as “Universal” in English. But enough about that.

The movie makers of Hollywood have promoted all that is evil in the world and like Roman Catholic Theologians who promote Paganism and its evil rituals as if it is all Bible sanctioned Christianity. Hollywood’s going to do the same thing. What I mean is, the movie producers have somehow convinced the masses that all of their extremely violent and flesh filled movies that promote everything from murder to rape is somehow to be considered entertainment by all. And the fact they have gone political in their many strange messages and plots for as far back as I can recall even from my teen years shows they do indeed have a long term agenda that is right now coming to fruition. And seeing how there isn’t a human alive today that has not been born after the end times started in 1844 which was the exact years Daniel’s 2300 year prophecy ended, none of us can afford to be swayed by Hollywood, politics, or worse yet the confirmed man of sin in Rome.

Jennifer Lawrence, like many of her cohorts in Hollywood that have sold their souls for riches and fame, they know all too well that unless they tow the line presented them and use their celebrity to bend the ears of the fans that worship them, they will lose their jobs, money, fame and pretended political powers splashed upon them that they playact a scripted part for a set fee that is purposely designed to sway the minds of their fans. And so when the powers that be demand they speak for the Pope’s climate change agenda, they will do it! They have no choice. And at present, the Pope can use the current disasters piling up to shore up support on his climate change docket towards enforcing his admitted mark. We are right now cleaning up from hurricane Harvey, Los Angeles is experiencing the worst fires in US history, Hurricane Irma, a Cat 5 like no other in history is continuing to destroy and kill, and Mexico just had a quake that was so bad it moved the fault 32 literal feet! And so yes, as prophesied the calamities are increasing. But not for the reasons the Pope claims!

Now for the obvious next step. Will it happen directly after Irma wipes out large portions of Florida, or will they let this all fester in the minds of the sheeple so as to have the prophesied compilation of additional disasters nicely stacked up so as the people ready to hear them declare, “the disasters are only here because all you Christians refuse to go to church on Sunday!” Time will tell. But do you remember this Vatican approved minister who declared the Tsunami of 2005 was the end result of people refusing to go to church on Sundays? Sure, it went over a like a led balloon because they only had the one disaster. But pile a few up, and they will have what they need to push the agenda forward.

But for Lawrence to claim God’s wrath is upon us because Trump, who has also been in bed with Rome since he had his mandated CEO meeting with him years ago, is ludicrous at best. It’s merely a way to increase the expectation in the minds of many that there must be a reason for the disasters increasing and seeing how next to no one reads Bibles anymore, any idiotic claim will most assuredly be used as the proverbial lump of mud that sticks in the minds of many that Rome can use to eventually grant them their “aha” moment when Satan steps up claiming to be Jesus who then claims everyone needs to keep Sunday holy to stop the calamities. The majority that have bathed in his lies all their lives will be primed and ready to declare this final lie to make perfect sense for all the disasters and so they will agree and receive the mark as the right thing to do.