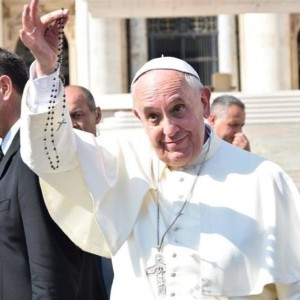 “Pope Francis invited Catholics to make a special effort to pray the rosary during the month of October as a way of commemorating the 100 year anniversary of the apparitions of Our Lady of Fatima.” –Source

As we know, the Pope recently asked the Polish people to pray the rosary on their national border so as to commemorate the so called defeat of Islam. I made a video on that just a week ago. As I stated in the video, the rosary of the Roman Catholic church is not only a series of prayer beads first used by Pagans of old and still in use to this day by Pagans as well as Roman Catholics, Buddhists, Muslims and even Satanists. These prayer chains are nothing more than a way for the unsuspecting and loyal followers in these religions to be used by their deceptive leaders as a way to anger the Christian God. And yes, the Bible does confirm that which I just said in detail.

For example, when Jesus was asked by His followers on how to pray, He gave them an outline on how to do that in Matthew 6:9-13. All Catholics, and thanks to the prophesied Vatican infiltration into all churches except the obedient remnant church, most people call that outline in Matthew 6 “the Lord’s prayer” when in fact it is not actually a prayer at all. In fact, all of John 17 is how the Lord Jesus prays. That chapter is in its entirety a prayer He spoke in the Garden that night right before He was arrested. If you place the outline He gave us in Matthew 6, you will see He used that outline in His prayer.

Now for something many Catholics have no clue of because their priests, who have admitted in writing are truly Pagans using Christian names for their ancient rituals, these Pagan priests never give them everything the Bible has to say on any one topic, and so the Catholic people have no idea of what I am about to say.

For example, as we all know the rosary is a collection of many prayers that are to be repeated over and over again each and every day. I know this as fact because when I was Catholic over 3 decades ago I prayed that rosary every day. Most of the prayers are repeated and even dedicated to the so called “Queen of Heaven” who most believe is the Mary of the Bible when in fact it is not. But before sharing that biblical fact. Notice this; when they asked Jesus how to pray, before He gave them that outline in Matthew 6 He stated the following quite clearly. He said in Matthew 6:7, “But when ye pray, use not vain repetitions, as the heathen do: for they think that they shall be heard for their much speaking.”

That’s right, He specifically stated they must NOT use repetitive prayers like the Heathen’s do. And who are the heathen’s Jesus is speaking of here? The word “heathen” in that passage comes from the Greek word “ethnikos” which translated into English means “of the nature of Pagans, alien to the worship of the true God.” And as we know the Vatican admits in writing to have adopted Pagan rituals in their church services and dogmatic traditions.

And so right off we see praying the repetitive rosary the Queen of Heaven as Mary is referred to in the Catholic church is something that goes directly against the Christian God of the Bible. And just so you know, this type of false worship angers Him. Notice what it says in Jeremiah 7:18, “The children gather wood, and the fathers kindle the fire, and the women knead their dough, to make cakes to the queen of heaven, and to pour out drink offerings unto other gods, that they may provoke me to anger.”

Any so why do you suppose the Popes of Rome want their flock to anger the Lord God as many nonChristian religions do like the Hindu, Muslim and Satanist? Have you seen my videos wherein we have proof the Vatican is not only holding worship services to Satan inside the Vatican, the Vatican itself as well as the audience hall standing on Vatican ground were purposely designed to glorify Satan! Think about that basic reality for a moment. We are in the last days when prophecy states Satan will infiltrate all the churches to make people worship him instead of the true God so as to garner many souls into hellfire with him. And prophecy also says the Popes of Rome will be outed as his cohorts and the prophesied men of sin right before Jesus gets here. And so that is why the Popes of Rome demand the people not only anger the God of the Bible, but join them in offering praise and glory unto Satan!