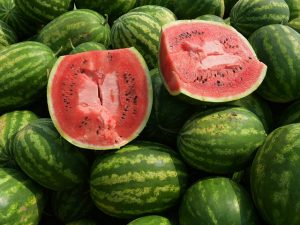 This is so childish! Such hate, such racist hate! And no, I am not talking about the guy with the watermelon. I am talking about the boss that fired him because he got offended by him bringing what he assumed was an honest gift to them on his first day of work; which by the way was customary for new firefighters to do on their first day on the job. And no, as the article proves, he did not bring that watermelon as an insult.

All I see here is more political propaganda designed to keep the hateful racist mindset boiling over in America. And so expect more silly racists claims about everything from a decorative cotton display in Hobby Lobby being a racist act to Walmart selling Obama Christmas ornaments being declared racist because they have to be hung on a tree. And no, I do not condone the Pagan celebration of Christmas at all. I am just making a point at how silly this has all become.

What surprises me is that, when are we going to see people picketing in local hardware or big box stores because they sell rope that a racist thinks is all about hanging black and yes even white people from trees not too long ago? That’s right, it wasn’t only the blacks that hung on those trees. But the divisive media won’t bring that historical statistic up about all those white people hanging from trees either. To do so would be counterproductive to their present agenda.

What really amazes me about some of these racist politicians who claim all the people in the nation agree with them, have you noticed what I’ve noticed? Why aren’t we seeing any BLM activists picketing Planned Parenthood which to this day has set up shop in the poorest areas of the cities wherein the majority of their customers now reside? The numbers simply don’t lie here. It has been found that 79% of Planned Parenthood Abortion Clinics Target Blacks and Hispanics. Yet even the BLM movement has never once picketed a Planned Parenthood clinic in their own backyard! So as you can see, it’s all a farce and the Roman powers that be are doing all they can to corral herds of people into their way of thinking no matter how easy it is to prove it all a lie.

So, why is all this talk of racism really happening? What’s the actual agenda here?

Do you recall how all the Constitutions have been changed recently in all those nations that are card carrying members of the Vatican political pool? As I stated in numerous videos over the last few years, as the prophet Daniel predicted, Rome needs to set up a Socialist format worldwide that will allow the leaders of each nation to play the part of Herod who stands in worship to his Caesar in the Vatican when it comes time to enforce the mark. And since all of them have had direct Vatican influence in their recent Constitutional rewrites; America is now next in line and so our Vatican approved leaders have designed this false narrative in the media that every American hates his neighbor due to his skin color so that the end result can bring about the need of a new US Constitution.

I know this may be hard to see at first, but let me see if I can clarify this a bit. Have you seen the reports on all those so called “slave owning” forefather statues (be they slave owners or not) that have been pulled down across the nation by their local government leaders? There’s an actual political reason they’re doing that! It won’t be long now before they shred the entire US Constitution with the excuse that they must do so to keep the peace because everyone knows it was slave owners that signed it and so we need a brand new Constitution that allows for equality and you guessed it, more religious laws. After all, have you ever noticed how every time the mark of the beast is mentioned in Scripture the word “worship’ is right there with it?

As prophesied, it will be a religiously enforced law and the only way they could ever hope to get that done was to first get the churches to join with the State in their 501c3 contracts so as to have the exact same absolute power structure as the Vatican had in the dark ages wherein they were a church and State that ran society with an iron fist wherein hundreds of millions died. And thanks to Bush making it possible in March of 2006 for all church pastors to lobby religious laws and Trump sealing the deal for those same Pastors by preventing problems with the IRS for doing so back in May of this year, they now have the power to lobby for those religious laws unmolested by the Roman Catholic IRS just as prophecy said they would and so for right now the Constitution is the only thing left standing in their way. And yes, in order to enforce the markproperly, that new Constitution will need to be based on a Socialist format. And that is why I have two pages on my site that show how they have been moving towards both a religious and socialistic form of government right here in America. And if you don’t think it’s working as prophesied. Not only are all the pastors considered official government agents as of March 07, 2017, check out my video wherein I show that “40% of the USA Prefers Socialism” now.

That’s one thing I like about Christian prophecy. It is nothing but absolute truth and it will happen just as the Lord who moved the pen of His prophets that declared it!

What gets me in all the racism brewing in America is how it’s even moving into the churches now. What I mean is, most racists and that means from all races, which includes the obvious white racists in the Klu Klux Klan, they all call claim to be Christians. Well here’s a shocker for you! If you can’t get along with the people down here because of the color of their skin, how on earth will you be able to get along with them in Heaven? That’s actually a pretty simple question to answer if you think about it. And the answer is, you actually won’t have to deal with it at all because racists simply aren’t allowed in Heaven. That sinful idiocy simply won’t exist in New Jerusalem. Jesus clearly said in Matthew 19:19 that we should all “love thy neighbour as thyself.”