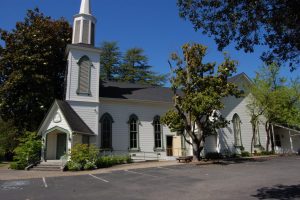 “The leader of the second largest congregation in the Presbyterian Church (USA), Rev. Shannon Johnson Kershner has declared that Christianity is not the only way to heaven. Kershner, 45, who leads the 5,500 member Fourth Presbyterian Church in Chicago, Illinois, expressed her belief in a podcast with the Chicago Sun-Times after she was asked the question, “Is Christianity the only way to heaven?” “No,” Kershner replied bluntly.” –Source

Question, where does our Heavenly Father reside? In Heaven right? And as Christians we all want to go to Heaven to be with Him. Knowing this, we that read and believe the Bible recall how Jesus stated clearly in John 14:6, “I am the way, the truth, and the life: no man cometh unto the Father, but by me.” Therefore, this woman who claims to be a pastor, even though the Bible says the only way to be a pastor is to be “the husband of one wife” (See 1Timothy 3:2) and worse yet; like most pastors the world over she blasphemes by using the title “reverend” even though when speaking of the Lord, it states clearly in Psalms 111:9, “holy and reverend is his name;” this woman is openly mocking the Lord in many different ways by simply standing as pastor before the people. And that is the main reason she stands there.

All that aside, which is bad enough but clearly par for the course when it comes to Rome’s ecumenical charge in all the churches; this so called pastor actually denies Scripture to declare Jesus to be a liar. And she does this in the same company as the last three Popes of Rome, at least one Cardinal, Billy Graham, Robert Schuller, John Haggee, numerous Catholic priests and many other so called men and women of God not too far outside the walls of Rome that have all declared in unison that Jesus lied when He said he is the only way to salvation. But there is a method to their madness. It’s called the ecumenical charge of Vatican II. This is why all the churches have joined with Rome in embracing everything from homosexual marriage to Islam as being sanctioned by the Christian God they openly hate with a passion.

Let me ask a simple question. How will the enemy of souls be able to convince all that are alive on planet earth that his Roman Catholic church is the one to embrace? How will the dying god of this world convince mankind that a church prophetically realized as the home of Antichrist which has proven thousands of times to be filled to the rafters with evil fruit, how will he be able to make people think that this long prophesied mother of harlots is the one true Christian church on earth? How will the enemy get the people of this world to ignore the facts so plainly laid out in prophecy and doctrine? Well, the answer is quite easy. Get them to stop reading Bibles. And for those that refuse to stop, give them edited Bibles with thousands of verses missing.

This is why we not only have ungodly men and women standing as pastors in mega-churches, we have them blaspheming, teaching their flock to break God’s law each and every week on the Roman Sabbath as well as declaring Jesus Christ is not the only way to get to Heaven. If the people in those pews were reading their Bibles this could never be preached on any pulpit! Satan knows if the Christian church doesn’t cave in and declare Jesus isn’t the only way to salvation, then he will not be able to get the Muslims, the Hindus, the Jews or even the Atheists to join in his long prophesied one world church headed up by his man of sin in Rome. And as prophesied, all the world is in fact wondering after the beast in Rome because our God, the one who penned the prophecies thousands of years ago saw the end from the beginning perfectly and put those historic events in His book long before they occurred so His obedient bride will be prepared and ready to stand undefiled before her Husband, on that great and dreadful day.