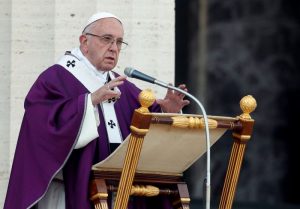 “Pope Francis has requested that Roman Catholic priests be given the right to get married. The request applies to priests in Brazil, and is on the agenda for an upcoming synod (church council) in the Amazon region. The controversial move would address the critical shortage of men joining the priesthood – but is likely to drive divisions through the church by enraging conservative factions.” –Source

The reason the Vatican has such a shortage of priests speaks boldly to long prophesied fruit of the priesthood. When speaking of the Vatican long before it formed, the Lord moved the prophet Daniel to declare the following in Daniel 11:37, “Neither shall he regard the God of his fathers, nor the desire of women, nor regard any god: for he shall magnify himself above all.”

Now we all know how the priests, prelates and popes do not “regard the God of their fathers” in that they admit in writing that over 85% of Catholic dogma is Pagan in origin which means they hate the God of the Bible (which they also admit in writing) and love the dying god of this world. (which they have been caught red handed worshipping on more than one occasion)  And we also know the Popes have declared themselves to be “God on earth” in writing numerous times and so they of course magnify themselves above all. This means Daniel’s prophetic voice is absolute as expected. But the prophet also stated the Popes, prelates and priests will be homosexual by declaring they won’t have “the desire of women” in that long prophesied passage. And as we all know by the countless molestation scandals, the fact that if you use the backtracking method of research regarding how typhoid started as they did when they found typhoid Mary, you find that Roman Catholic priests were dying of AIDS 11 times greater than anyone else in the world back before the AIDS cocktail was created which proves the disease began in the Vatican, and we also know about the Vatican owns and operates homosexual brothels and the Italian magazine that let the truth out that 98% of the Vatican priesthood was homosexual; there is something rather sinister boiling to the surface here in the Pope’s agenda to allow the priests to be married that most may be missing here.

The Pope claims allowing priests to marry is the fix all in this. But what most miss is the fact that the homosexual community is the smallest minority known to man, and especially in the USA wherein they sport a whopping 3.4% of the population. What I’m getting at here is, if the Pope has his way and this marital allowance if sanctioned by the Vatican, the Catholic church will not only have numerous homosexual priests getting married to each other, they will normalize homosexuality in the exact same way the demons in them did back when that act was the last straw that brought on the flood of Noah. Only now.. it will bring on the seven last plagues and the end of life on earth as we know it.