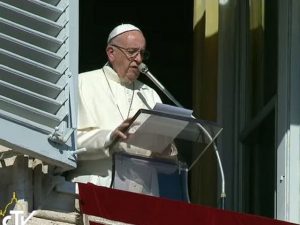 “Before a crowd of some 25,000 pilgrims gathered in Saint Peter’s Square for the noon Angelus prayer Wednesday, the Pope prayed for the conversion of terrorists’ hearts and asked God to rid the world of the murderous madness of those who kill in the name of the Lord. “Let us ask the Lord to convert the hearts of the terrorists and to free the world from hatred and from the homicidal lunacy that abuses God’s name to sow death.” –Source

As expected, this Jesuit Pope is using the deaths of innocent people as a way to further sanction and puff up Islam as a religion of peace so as to push his long prophesied agenda. By stating the terrorists that kill in the name of Allah are killing in the name of the Christian God is the real lunacy here. Not only do Muslims repeatedly declare Jesus Christ to be nothing more than a prophet, the Vatican inspired Koran’s description of Allah is by no means the same description we see of the God in the Bible. And yes, this Pope, most Protestants, and even the leadership of the SDA church declare the word “Allah” is to be defined as “God” in English; but that my brothers and sisters is nothing more than a bold faced lie. And I can easily prove it.

Now what I am about to say I already shared in two videos I did back in 2011 wherein I exposed the SDA church leaders claiming the name of Allah was the same as the title of God in English. Go to any online version of the Quran and do a search in that book and you will find something quite amazing. Now before I share this, notice that no matter what website you try this on, they’re all going to be different because they keep changing the Quran for obvious reasons. And I did this search on a few websites to double check all this. But I will only do this on two for the sake of brevity.

But my point is obvious here. The Pope, the Protestants and the SDA leaders are lying. If Allah was only an Arabic title for the English word God as they adamantly claim; why I ask do they use both titles in the Quran? Shouldn’t the word “Allah” be the only word used whenever they speak of their god cover to cover? They’re simply lying here. In fact, check out this clip of SDA pastor Dwight Nelson that I posted years ago, which by the way was 2 years after the SDA church started pushing Islam unto their flock as per Vatican order. This SDA pastor openly lies on camera before the SDA people regarding how the term God is used in the Quran. (start at 04:16)

The basic reality in all this is; even if they never used the term Allah and only used the same biblical terms for God as we see in the Christian Bible; and if the God of the Bible and Allah were one in the same as the Pope and his cohorts claim, then just to name a few out of dozens of strange and very offensive doctrines found in the Quran, why does Allah tell Muslims to beat their wives if they disobey? (Qur’an 4:34) Why are Muslim wives declared to be slaves to their husbands? (Qur’an 4:24) Why does Allah teach to cut off the hands of thieves, even on first offense? (Qur’an 5:38) Why does Allah teach Muslims to kill Christians by beheading them? (Qur’an 8:12)

I can go on and on for hours of course as there are many statements in the Quran that describe Allah and how his bloodthirsty will for his followers moves them to commit everything from honor killings of their own children to this brainwashed terrorist running people down in New York city for the glory of Allah. By their fruits we know plainly that Allah is not the God of the Christian Bible. But that will not stop the man of sin in Rome who has his prophesied duty to perform for his dying god so as to ready the troops of hell against real Christians on that day they surround the obedient bride of Christ. But as we know, not only will their weapons fall useless at their sides, their precious Vatican will burn and make all of them weep until the very day they all turn to ash under the souls of our feet. (See Malachi 4:3)