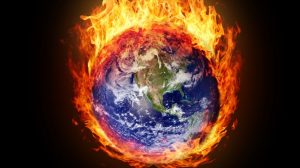 Some may think the Pope is just plain stupid since every honest person on the planet knows global warming is bad science. They can see what the 31,487 legitimate scientistswho are not politically connected with the Vatican’s paid off experts see. The legit scientists have declared in published journals more than a few times that science confirms global warming is not happening at all. And so why does the Pope still push this strange idea that even Al Gore has been recently embarrassed?

It has to do with the dying god of this world who controls the man of sin and the people prophesied to wonder after him. The crippled angel of darkness knows all about the coming plagues, and so the Popes of Rome, who have been caught more than one time allowing and promoting actual devil worship in the Vatican, have no choice but to do as their decaying god demands. They are just that loyal to him.

To put it plainly, the way I see it is, the main reason the man of sin in Rome is pushing global WARMING is because of plague #4. Satan has that much control over these men in Rome and because of that control, the Pope will even let the prince of darkness play him for a fool in front of everyone. The devil knows he needs to gather his troops for Armageddon so as to surround the 144,000 in the hopes of killing them before that great and final day arrives at the end of the plagues. And it’s not just the Pope he needs to use to get this done now. He is a major cog in his wheel of deception yes, but the enemy of souls also has to make sure all the billions of lost souls will do as he commands moments before Jesus returns.

What I’m getting at is; have you noticed all the violence in the Hollywood movies, sports, video games, music and society itself, which includes the normalization of legalized abortion and doctor assisted suicide no less? All this wickedness has cultivated the hellish mindset in billions of people that makes killing your fellowman no big deal anymore. Hence the reason the movies, games and sports are so popular and doctors can actually kill your children and sick loved ones at your request. But when the plagues begin, those that don’t have a problem with all this killing will have to step up and do as the devil commands them just as much as the pope does. And by this time Satan will have the perfect means by which to increase the hatred of the obedient Christians off the chart by declaring we are the reason the calamities have gotten so bad that they have now escalated to become the prophesied plagues.

In other words, before the plagues begin, the Pope of the day will declare all the calamities are upon the world because we the obedient Christians refuse to keep the Vatican’s admitted extra biblical invention of Sunday Sabbath. His excuse will be that keeping Sunday holy is the only way to please God who will then stop the calamities once we obey. But if they can’t get everyone on earth to obey the Pope and Satan who is physically claiming to be Jesus Christ on earth by this time, they will twist prophetic reality and claim the plagues will come upon all on earth unless the obedient Christians stop keeping the Biblical Sabbath. This causes the people of God to be hated by everyone alive that have received the mark. And so when plague #4 hits, which is all about the temperature increasing in a very scary way worldwide to the point massive droughts wherein all vegetation, animals and many people are dying; it will be then that the Pope’s global warming claims will finally appear valid in the eyes of billions that he has lured into his ecumenical camp. And when you compile that awful plague with the previous 3 plagues already upon the lost causing them much suffering, it will be the final straw Satan needs to break the back of common sense and moral decency still lingering in a few souls under his command. This final push will move them all around the world into a feverish bloodthirsty pitch so as to cause them to rush upon the people of God to kill them.

But suddenly the darkness of plague #5 begins and in that awful darkness the truth is made known before the eyes of all on earth and the loving promise of God’s protection appears to encircle each obedient Christian causing the lost to tremble in absolute terror because it is at this point they finally realize the wolves they thought were trusted pastors had been lying to them all along regarding the biblical message we proclaimed for years. This sobering truth is now made clear in their own minds that they have been marked for death and eternal damnation because they trusted the Pope and his wolves, and so their hatred and weapons now turn upon their lying pastors. And as plague #6 begins preparing the way for the Eastern sky to split wide open revealing the true King of kings and Lord of lords, Satan quickly rushes about the world to gather his forces together via the kings of the earth thanks to the ecumenical work he has wrought both in and outside the church for one last attempt in his Armageddon rush to defeat Christ. But as we know, plague #7 falls. And as the world literally falls apart at the seams with billions of people dying all over the world simultaneously, the dead in Christ will rise, the 144,000 who the billions previously wanted to kill are now granted immortality in the twinkling of the eye and they ascend to forever be with the Lord Jesus Christ.