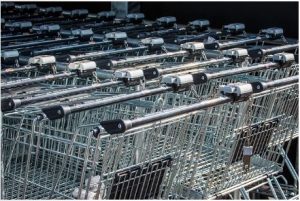 “Under the legislation, which will now go to the upper house of parliament for further debate, trading will be banned on two Sundays a month from March 1 next year. The ban will be stepped up to three Sundays a month in 2019, while in 2020 trading will be prohibited except on seven Sundays a year. The ban will not apply to online stores, fuel stations, railway stations, pharmacies and some florists. The legislation was backed by 254 members of the 460-seat lower house of Poland’s parliament, with 156 against and 23 abstaining. A survey found last month that 51% of Poles were in favour of restricting shopping in Poland on all Sundays.” –Source

No this isn’t the prophesied mark of the beast. But it is a major stepping stone towards normalizing it; and it’s no mistake it’s being done in Poland wherein 1 millionwere deceived into praying the Vatican’s admitted Pagan rosary beads on their border back in September of this year. Sorry, there’s just no easy way to say that.

If you compile this long prophesied development with all the religious banter in American politics the last 2 years as well as the thousands of articles online and millions of articles offline all over the world wherein towns, cities and in some cases entire nations like Poland are working towards what students of prophecy have been declaring all along as the bold and obvious signs that Sunday laws are indeed on the very near horizon. That being the bold and obvious reality you have to realize church leaders are right now purposely lying to their flock when it comes to the signs of the times.

Case in point, when it comes to Sunday laws, how on earth can the president of the Seventh Day Adventist church declare on camera that “nothing of that sort is in the pipeline at the present time” when those of us with eyes that see can see so much evidence that he is wrong? It’s because as I reported back on December 23 of 2016. The president of the SDA church has publicly announced he has joined hands with the man of sin in Rome to do as Rome was prophesied to do regarding the preaching of another Jesus so as to fill the ecumenical trophy case of Rome with lost souls!

Yes many have suspected the fix was in over the last few decades in the SDA church. But now with their publicly announced statement of faith echoing political correctness only a papal prelate can appreciate, some obedient souls in the church are finally doing just as Revelation 14:4 predicted they would do when it said, “These are they which were not defiled with women; for they are virgins. These are they which follow the Lamb whithersoever he goeth.”

Seeing how Jesus is no longer allowed in the SDA or any other church in bed with the first and second beasts of Revelation, many have made the proper choice to follow the Lamb when He was forced to leave by the leaders of the apostate churches just as many followed Him out of the Synagogues 2000 years ago.

Additional Articles Confirming we are in the Last Days:
D.C.’s new Bible museum says it wants to avoid politics. But its opening gala is at the Trump hotel * Virginia Youth Pastor Murders Family During Thanksgiving Dinner * Delingpole: Exposed – the Liberal Astroturfers Behind the Global Warming Scare * VIDEO: ‘Outrospectre’ Virtual Reality to Give Simulated Experience of Death * Egypt mourns more than 300 killed in mosque attack * Google, Facebook, Twitter and YouTube are the Real Threat to ‘Net Neutrality’ * NASA’s ‘fake news’ about water on Mars * Mother Wins $12 Million in Wrongful Birth Lawsuit, Wishes Her Son With Autism Had Been Aborted * VIDEO: Ash Columns Rise From Agung Volcano Following Second Eruption in a Week * VIDEO: This is how evil mankind can become * VIDEO: How evil can tradition get? See this * Ex-Google Exec Is Founding a Religion Where People Worship an AI God * VIDEO: Mom sentenced to prison in “senseless death” of 7-year-old with strep throat * VIDEO: Raped, tracked, humiliated: Clergy wives speak out about domestic violence * Facebook removes ‘delete post’ option from the desktop web version * VIDEO: Deadly Wave: French govt forced to act after 45 police suicides this year