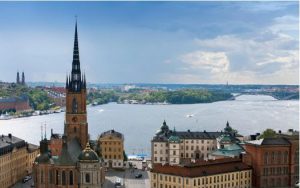 “The Church of Sweden is urging its clergy to use gender-neutral language when referring to the supreme deity, refraining from using terms like “Lord” and “He” in favor of the less specific “God.” –Source

This is how far the insanity of the homosexual movement which was started by the Vatican years ago has spun off so as to both mock the God of creation, as well as normalize whatever the flesh lusts after. Those of us that have eyes to see and common sense to stand firm in the truth know they can make all the strange claims they want about the Word of God or even basic reality for that matter. All it’s doing is confirming end time prophecy regarding how easily some so called Christians are used by Satan to mock the Creator God. Even a babe in Christ can open a Bible to find the Lord is referred to as Him, He, His and even Father cover to cover in the Bible. But because we know Rome has also declared in writing many times how much they hate the Bible and the Author of it; one has to expect such spiritual insanity as this coming from them and those they control. And yes, it’s no mistake that the Lutheran church in Sweden was the first to proclaim this heresy just a few weeks after joining hands with the Pope in person on the 500th anniversary of Martin Luther’s 95 thesis that they falsely claim has been debunked.

Students of the Bible know that Rome is the one behind this as both prophecy and historic record confirm. And as they usually do, they are using one of their ecumenical pawns to test the water in their long prophesied antiChristian agenda so as to keep their image as clean as possible in this end time society. As is apparent by this article, and this is beside the point that the Lutheran church of Sweden is led by a woman, the Pope has demanded she show a bold sign of loyalty to the Pope after claiming the Protestant movement has ended by openly stating that removing the gender of our God is something all must do so as to place the lust of the creature above the will of its Creator; which will then belittle the Word of our God. This not only shows how little Biblical and even common sense reality matters to those moved by Satan to bow to this man of sin; it also shows another prophecy fulfilled found in Romans 1:24-25 which says “God also gave them up to uncleanness through the lusts of their own hearts, to dishonour their own bodies between themselves:  Who changed the truth of God into a lie, and worshipped and served the creature more than the Creator, who is blessed for ever. Amen.”