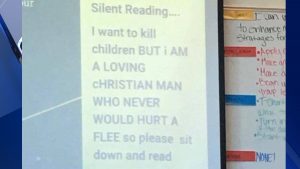 After watching this video, three things come to mind in a big way here. #1, the obvious… As I have been saying for literally decades, the American School system is not a safe place for children. My homeschool spurs page with thousands of articles and videos proves that hands down. #2. This News report looks to be yet another slam on Christianity in that the second projected slide placed on screen claims the teacher is a Christian. (see pic on left) If you look through those articles and videos I have on my aforementioned page you will see Christianity has been targeted in a big way in American schools for many decades. And #3; Notice how this teacher spelled the word “flea” on that slide. Now yes it also appears he missed the fact the caps lock was still on as he used a lower case “i” and “c” in ways that don’t work well with proper grammar; but the word “flee” used here is very telling in regards to his attention to details. No, he is not talking about fleeing as the word he used here would normally be used in a proper sentence, which we know is defined as someone seeking to escape danger in a hurry. He is talking about a little bug found on rodents and house pets.

As I also exposed all over the aforementioned page on my website about the American school system, no one, not even the reporter that read the slide out loud on camera noticed a literal teacher of children does not know how to spell the word “flea!” Worse yet, I looked this man up and found that not only is he the basketball coach for the boys of that school, he is also mentioned on his School District’s awards page as a CERTIFIED “Language Arts Teacher at Stuart Middle School.” That’s right! He is certified in the English language arts, and yet he can’t spell the word “flea?” Perhaps it was a Freudian slip and he was really saying those children should “flee?” I mean seriously, why wait  until it’s too late mom and dad? What’s more important? Your second income, or the life of your precious children?

What I shared here is only 3 reasons to get your children out of the American school system. If you would like a few hundred more reasons wherein we have well documented proof your child’s spiritual, educational and even physical life is in real danger; visit my homeschool spurs page when you get time.

Additional Articles Confirming we are in the Last Days:
VIDEO: Look who calls evangelicals ‘extremist religious group’ * Mom of three dies after doctors said she was ‘too young’ to have bowel cancer * Russia, China aggressively expanding nuclear arsenal * Drunkards and smokers church opens in Johannesburg * Ex-Facebook exec: Social media ‘ripping apart’ society * Illegal Immigrant Plumber found guilty in slaughter of San Francisco family * VIDEO: Police say woman lived with husband’s body parts for six months * FYI: Some HP laptops are hiding a deactivated keylogger * An underwater volcano has made a mysterious new island in the South Pacific — and NASA satellites captured the amazing process * Husband and wife locked eyes. Then he ‘put the truck in gear’ and ran over her, prosecutors say * Woman Pleads Guilty After Prosecutors Say She Murdered Pregnant Neighbor and Stole Her Baby* Turkey’s Erdogan threatens to wipe out Jews * 2 baby-body-parts dealers ordered to close * Cancer survivor Chloe Terpenning disciplined for wearing hat at School * VIDEO: Southwest passenger threatens to ‘kill everybody’ on plane after being caught smoking * VIDEO: Disney’s not safe for kids – but you knew that * VIDEO: Colorado teacher’s troubling message, ‘I want to kill children,’ leads to resignation