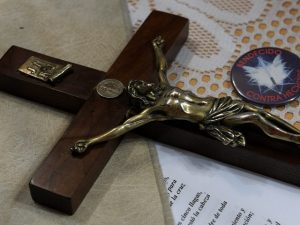 “In the face of the rising tide of demonic activity, Father Collins said he is “baffled” that the Irish bishops are not reacting to the need by appointing more priests as exorcists. Complaints range from claims of ghostly encounters, to people being pulled from their beds, and even “full-blown possession.” –Source

Do you remember the 1973 movie the Exorcist? That was the perfect example of how Roman Catholic exorcism works. It’s all a money making scheme. How do I know that? Well first and foremost, most exorcisms performed by Catholic priests take months and even years to supposedly expel the demons. And each time the priests recites the incantations and rituals over the possessed victim the family is charged a fee. Hence the reason some exorcisms take years. It all depends on the wealth of the family. But if you look in your Bibles and see that each and every time Jesus cast a demon out, not only did it happen instantly, not a single person was charged a fee.

Now notice this as well. In the article the priest stated that “The key is to have well-trained personnel to deal with the issue and help people get the assistance they need, the priest insisted.” But I have to say that’s how Rome has always worked. When you ask them about their false doctrines like Purgatory, eternal life in hellfire or Trinity they claim only ordained leaders in the church can understand such things. But here’s the real key to casting out a demon. All you need is faith in Jesus Christ.

In fact, each time in my life when I was called to partake in offering simple prayers to cast out a demon, each time we all witnessed the demon left instantly from the victim. But the Vatican has no faith in the Bible or its Author. In fact, do you recall back in September of 2000 when the Vatican’s head exorcist and the Pope himself could not cast a demon out of a teenage girl in the Vatican? That young girl even tossed some Vatican guards around like rag dolls. This all happened in front of multiple witnesses and ended up in many Newspapers around the world despite the Vatican’s attempt to cover it up. The reason the demon laughed from within that little girl at the Pope’s attempt to grandstand his so called Catholic power was because it knew the Pope had no faith in Jesus and even the demons know that is the only key to defeating Satan!

It is only the name of Jesus Christ that can cast the demon out. But since Jesus had already ascended to Heaven and Paul was going about in faith doing mighty works in the name of the Lord, those Jews had more faith in Paul than they did Jesus in the exact same way the Popes of Rome have more faith in Mary, Peter, Anthony and a host of other dead humans they display in marble statues in their churches. The exorcists of Rome are simply religious con men looking to make a quick buck. Nothing more, nothing less. A babe in Christ with true faith in Jesus Christ makes Satan much more fearful than any of these wolves dressed in Pagan robes. This is why the possessed man leaped on the vagabond Jews and the little girl laughed at the Pope before all those witnesses.

Additional Articles Confirming we are in the Last Days:
VIDEO: Should SDA Pastors Step Down? * VIDEO: Does Google Home know who Jesus is? This man says no * VIDEO: FYI: Check for this before you store your valuables in a hotel safe * VIDEO: Fear keeps you OUT of Heaven * VIDEO: Watch the elderly speak in 1929. Thanks to food additives and AMA drugs most elderly can’t even form two words today * Facebook acquires biometric ID verification startup Confirm.io * VIDEO: This police officer aggressively arrested an 18-year-old for putting her foot on a subway seat * Pennsylvania couple beat 4-year-old to death over spilled cereal, authorities say * VIDEO: A school police officer body slammed a teenage girl while she was in handcuffs * FYI: If you’re using an Android phone, Google may be tracking every move you make * VIDEO: 14-Year-Old Florida Girl Allegedly Beats Up Classmate While Students Snapchat Incident * VIDEO: GRAPHIC: Mattis Treated to Troops Drinking Snake Blood and Walking on Fire in Indonesia * AT&T Calls for Legislation to Prevent Unfair Censorship on Google, Facebook * Teacher sued for teaching Islam is ‘the true faith’ * Clinton Foundation Uses Unseen Transactions for Influence Peddling * Four natural disasters wreak havoc on Earth at nearly the same time * ‘He Kissed My Forehead and Slit My Throat’: Teacher Who Abused Teen Student Tried to Kill His Wife * Adultery now declared a “positive experience” for couples * Hard-Left Labour Chairman Called for Execution of President Trump * Experts Weigh in on ‘Zombie’ Deer Disease: It Has Not Been Passed to Humans —Yet * Deputies: Florida Man Beat 3-Year-Old Girl, Put Her in Hot Oven * Obama-Farrakhan Photo Released After 13-Year Media Cover-up * YouTube to Invest $5 Million in Efforts to ‘Counter Hate and Promote Tolerance * Plainclothes Police Officers Severely Beaten by Drug-Dealing Migrants * Socialism: Venezuelan Monthly Minimum Wage Falls to Under One Dollar a Month * Muslim who shot cop for Islam was ‘lying in wait’ * LOL Humans now accused of making Earth cooler * ‘Lies’ about 9/11 probe apparently ‘approved by Mueller