PROOF: Secret Rapture is a LIE! 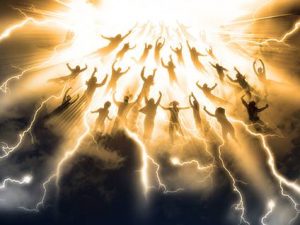 Some of you may have noticed that I turned off the comment section in my last video due to all the precious souls chiming in who have no idea false prophets taught them a Vatican contrived secret rapture. Even though I posted those two pages in the video and linked even more info out in my blog entry about the video, none of these poor souls bothered to check out those pages to see how I not only listed all the verses they were taught to use to claim a secret rapture or seven year tribulation, I also posted the verses before and after them proving they were taught to twist their true meaning. And so I decided to make yet another video to try and explain what they keep missing. This actually came to me as I was in Bible study this morning. I just happened to be once again doing a study in the book of Revelation and it dawned on me how easily the Bible exposes these false prophets.

The reason John says to the churches they are his “companion in tribulation” is because he, like all the other Christians, were persecuted, tortured and killed for their faith at that time. And while in tribulation John was blessed with the task of writing down the vision he received while he was in exile on that island. But today’s Christians are so weak and so fearful that they clamor after false prophecies that help calm their fears as to what’s really happening all around them.

As prophesied, the fear of billions has caused them to demand the pastors lie to them on the pulpits about escaping all that earlier people of faith went through in history because the real prophecies of today are just too scary for them. Check it out. It’s in Isaiah 30:10 as I shared in the last video. These weak Christians today are those “Which say to the seers, See not; and to the prophets, Prophesy not unto us right things, speak unto us smooth things, prophesy deceits:”

The secret rapture and the seven year trib lie of the devil is an absolute fulfillment to this real prophecy in Isaiah; and their own attack on the Bible’s prophetic truth that every student of prophecy can see is happening as we speak confirms this hands down. We the obedient people of God declare the Lord is coming and the plagues are about to begin. But the fearful Christians tell us to shut up and preach smooth things unto them so as to calm their fear.

Look back in time and you will see how the real people of faith stood firm during their times of tribulation. Just to name a few out of many; do you recall how Noah and his family dealt with the flood wherein everyone else died all around them? Or look at Joseph who was in prison for years after his brothers sold him into slavery. And what about the Jewish people who were in tribulation for a whopping 400 years? They were even there during the plagues of Egypt. And what about Rahab and her family who were protected of God during their tribulation when everyone in their city were dying just outside their door? Shadrach Meshach and Abednego were literally cast into a furnace of fire without the slightest bit of fear. Daniel as well was tossed in and spent the entire night in the lion’s den trusting the Lord the entire time. Jumping ahead we see how countless Christians were fed to the lions and even burned alive to light up the Roman coliseum at night for the spectators to watch Christians being tortured and killed. And not long after that, hundreds of millions of Christians were tortured and killed by the Vatican prelates for just over 12 and a half centuries. And today, as prophesied, that little time of trouble is already here that was prophesied to come right before the plagues begin. And at last count,  165,000 Christians die each and every year at the hands of Muslims who have shown their undying loyalty to the Pope on camera no less. And think about this for a moment. Each and every one of these obedient Christians were given the chance to denounce Jesus Christ as Lord so as to prevent their deaths, yet none did! And yet the American Christians think they are so special that God will not allow them to go through what every other child of God went through before them?

Where is your faith mr and mrs Christian? Why don’t you trust Jesus like your brothers and sisters of old did? Do you not understand what Paul meant when he said in Philippians 4:13 that, “I can do all things through Christ which strengtheneth me.” Satan has all of you right where he needs you. Your fear is the foundation his false prophecies are built on and you are denying Jesus Christ and His Word each and every time you claim He will rapture off this sin sick world before the plagues come when His Bible boldly says otherwise. That is no different than a Muslim asking you to deny Jesus Christ right before they saw your head off. For to deny His Word is to deny Him Lord. And because you have no faith in Jesus Christ to give you the strength to do all things in His name, the smooth and prophesied deceit of a secret rapture calms your heart much more than the promised peace Jesus offered each and every martyr that refused to deny Him as Lord, King and Saviour moments before they were killed for their faith.

That fear you hold unto right now means you don’t really trust Jesus to do as He promised and that means you will most assuredly be refused entry into Heaven for it is plainly written in Revelation 21:8 that “the fearful.. shall have their part in the lake which burneth with fire and brimstone.” That fear you have now proves you do not trust the promise Jesus made to keep your heart filled with His peace during the persecution of Christians happening right now as well as when the plagues begin. And yes, that same fear will cause you to receive the mark. The fact you believe the lies of Rome regarding the second coming without checking out what your Bible really says confirms you will get the mark because that false prophecy was only accepted by you due to the fear you have regarding those days in the first place. For if you fear to go through tribulation as the Bible shows every true believer has gone through in the past; when they tell you that you cannot buy or sell unless you agree to the mark, most of you will be too fearful to go without your precious creature comforts and candy bars and so you will receive the mark. And for those of you that hold out till the guillotines that are already on US soil come out of mothballs demanding the death of those refusing Rome’s mark, the rest of you will receive the admitted mark of the beast because you fear dying.

And so I implore those of you that believe in escaping before the mark is enforced, open your Bibles, read His Word and trust what Jesus said in Matthew 10:28 which was, “fear not them which kill the body, but are not able to kill the soul: but rather fear him which is able to destroy both soul and body in hell.”