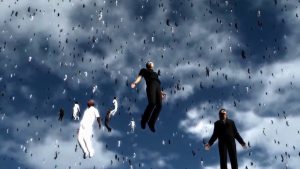 When you get time, check out this video. It’s a prank on a young girl who thinks all her loved ones have been raptured and she is left behind. She gets very scared thinking she is stuck on earth during what they claim to be a very scary 7 year tribulation. There are actually a few videos like this on YouTube.

Now check this out. Some guy on Go Fund me is looking to raise $10,000 cash so he can buy a bunch of blow up dolls. His plan is to fill them with helium and release them close to churches as they are having services. When the dolls float over the church he then plans to film the entire thing after running into the church shouting, the rapture has started.

In the video of the girl screaming, wherein the prankster placed clothing on the floor to make it look like he was raptured out of the clothing, one can see why that poor girl got so fearful. Her pastor is one of the many false prophets that were to come in our day that teach about a secret rapture, and so she literally thought she had been left behind even though she shouted she repented of her sins that morning. That scared her to death because the promised peace of Jesus Christ was never in her heart. And without Jesus in the heart, truth cannot find entrance. And when truth cannot gain entry into the heart, then lies become truth unto them. That means any lie can then be used to further manipulate and even persecute the one that believes the lies.

Since the people being pranked in these videos believe the already proven lie of a secret rapture, then the new lie that it already happened and they were left behind cultivates even more fear in their hearts. But if they knew Jesus Christ as Lord and Saviour, then every lie of the devil would be easily exposed by simply trusting Bible Scripture. What I mean is, the obedient Bible student who trusts the Bible and not the man-made theories filled with all sorts of gaps in their prophetic theology, these students of the Bible know the secret rapture and 7 year tribulation is a lie because they have read all the Bible verses and not just the ones twisted from the pulpits and so a scary prank like this would not affect them in any way shape or form. Studying the Word of God and accepting His Word as the final say is the only way the seeker can find Jesus Christ as Saviour so as to gain the perfect peace that is promised to all. Not only will it prevent them for believing lies like this; the peace Jesus gives them fills them with joy instead of fearing that the world truly is about to end.