Pope & SDA: You are Saved by the Church 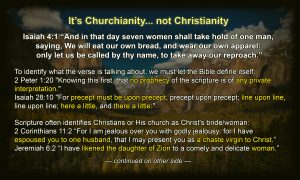 As some may already know, I posted a video on this yesterday evening. It’s part of a series of videos I pray will help the SDA people discover the danger they are in while staying in a church that as prophesied has been taken by Rome in recent decades. It is the hope of the obedient remnant people that once this truth gets out far and wide about the Vatican infiltration in the SDA leadership, many still sitting in the pews will awaken from their prophesied slumber to join the remnant of her seed so as to do as Jesus promised His obedient bride will do.

Everyone knows the leaders in the SDA church have not been trustworthy for decades and I praise the Lord that some are finally beginning to discover the well-hidden information I am now sharing that shines the light of day upon the infiltration of Rome. As per historic and prophetic record this is how Rome has always worked behind the scenes. Next to no one in the church pews know about what their leaders are up to. The hierarchal structure of Rome that is now in the SDA church is one sure fire way to make sure next to no one in the pews ever discovers these hidden documents. And so I hope to open the doors wide, look under the rugs, peak in the closets and do as the obedient people of God have done for eons to help those that love the Lord find their way back to safety in His loving arms.

The patriarchs and prophets of old knew about the apostasy just as the obedient remnant people of today who are known to follow only the Lamb withersoever He goeth. (Revelation 14:4) We know that those refusing to obey the Lord are being shaken out of the true church of Jesus Christ as we speak. This is why our message is in urgency. The longer you stay in the apostate SDA church, the harder it will be for you to leave. Especially after your Conference leaders and pastors who were declared official government agents by President Bush back on March 07, 2006. And thanks to President Trump’s pen in 2017, these SDA leaders can now lobby for religious law as their 501c3 has permanently granted them the power to do so on December 02, 2017.

In this new video I want to show how the SDA leaders are echoing the same heretical lie the Popes have declared for centuries regarding their claims that salvation is only found by staying in the church no matter how sinful it is. Notice what Rome has been saying all along and continues to say to this day.

With that said, is it possible the SDA church is also teaching their flock that there is no salvation outside the church? Worse yet do they also claim the church is as the ark of Noah just as the Popes of Rome have done for centuries?

And just to reiterate, Pope Pius IX stated this at Vatican I in 1854. He said, “We must hold as of the faith, that out of the Apostolic Roman Church there is no salvation; that she is the only ark of safety, and whosoever is not in her perishes in the deluge.”

Just so you know. According to the Word of God in many beautiful verses we can know that no one is saved by a denominational name. 2000 years ago the Jewish leaders rejected Christ and caused many who followed their lead to do go to their graves without a Saviour by twisting the truth so as to cause the people to trust the church leaders over the Lord Jesus Christ. And so the warning the apostle Peter declared 2000 years ago obviously needs to be repeated today unto all those trapped in the SDA church.

When speaking of Jesus Christ Peter said in Acts 4:11-12  This is the stone which was set at nought of you builders, which is become the head of the corner.  12,  Neither is there salvation in any other: for there is none other name under heaven given among men, whereby we must be saved.

Additional Articles Confirming we are in the Last Days:
‘I used to think that babies were born a girl or a boy’: Why some parents are raising kids undefined by gender * One World Trade Center Lit Up in Pink to Celebrate NY Abortion Law * FYI: Facebook, Twitter can still stalk you if you delete account * University hosts LGBT ‘Discovery Camp’ for young teens * Millennial Democrats Identifying as Socialists