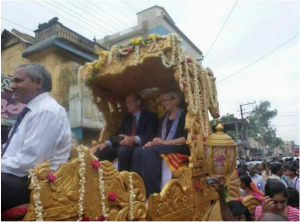 If you have been watching the News the last few decades you would know that politicians and church leaders that bow and do favors for the Pope are granted all sorts of worldly benefits by doing so. And this is especially true for church leaders who create the image of the beast in Rome via their 501c3 and in Wilson’s case, an added bonus in granted by their emulation of the Vatican’s hierarchal format wherein the man at the head of the church is considered “another god on earth” or Pope as Rome calls it. I did a video on the SDA church’s Roman Catholic hierarchy as well not too long ago.

But why did I title this blog entry Pope Ted?

Well.. as we know, the office of Pope is not a Christian office. It is actually a religio/political or church & state autocracy wherein the man at the top of the hierarchy is granted a godlike position over the people under him so as to replace Jesus Christ as the Head of the church. Hence the reason the Pope is declared the “Lord god pope” among other blasphemous titles. And we know Ted Wilson sits as president of the SDA church in the exact same hierarchal position as the Popes of Rome. And as we have seen all throughout biblical history wherein power like this corrupts the man deep within, does Ted Wilson show signs of being enchanted by the dying god of this world? Yes, it appears he does because heads of state that do not study prophecy do in fact think and even declare him to be a Pope. Notice this article.

The President of Uganda actually said to Ted Wilson that “It’s good to receive the pope into my office.” Did Ted Wilson explain that he was not a Pope? No he did not. Did he take the opportunity to explain who the Pope really was in prophecy as well as current political reality as is his duty as a Christian? No, he did nothing of the sort. Did he even try to correct the president in any way shape or form so as to make sure he knew he was not a religio/political autocrat or Pope as most call such men? No. The article says, “Wilson replied, softly, “I am just a humble servant of God.”