Disney has been in trouble lately. After the company adopted an aggressive pro-LGBT ideology and began installing it in products for children, unhappy parents canceled subscriptions, movie attendance collapse and its stock plunged. Now the company’s agenda appears to not only include condemning traditional marriage beliefs, but promoting Satan. The promotion is appearing in a new series called the “Santa Clauses,” a series on Disney+ that reboots the earlier “Santa Clause” feature films by Tim Allen. A report at the Gateway Pundit noted, “Defenders of the series claim the scene where children are holding the letters which spell out ‘We Love You Satan’ is supposed to say ‘We Love You Santa’ and is just one of the many comedic scenes in the movies but parents aren’t laughing.” Source. 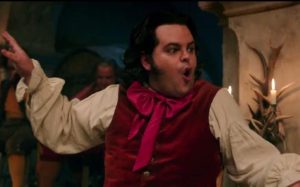 “Now, Disney is to move firmly into a new era as it introduces its first “exclusively gay moment”, disclosing the new version of Beauty and the Beast will star a manservant exploring his sexuality. The live-action version of Beauty and the Beast is already on course to be the most thoroughly modern film of its kind, with star Emma Watson discussing how she made the role of Belle more feminist. The team have now revealed one character, LeFou, will experience Disney’s first ever “gay moment” on screen, as he struggles with his feelings for ultra-macho leading man Gaston.” –Source

Surprised? Yeah, neither am I. Many people, and this includes Christians and non-Christians alike, have known for many years that Disney is one of the most evil organizations on the planet. And I say “most evil” because as we all know, the adults in this world have been easily CONvinced into thinking such things as homosexuality, fornication and bestiality is normal. But unless you indoctrinate the children early on, as we have seen for decades now wherein Hollywood companies that have designed “entertainment” specifically for children that is both blasphemous as well as downright satanic, you’re not going to have an easy row to hoe when they grow up. But Disney literally built an empire on manipulating children just as the Vatican did with everything from all boy schools to choirs.   END_OF_DOCUMENT_TOKEN_TO_BE_REPLACED