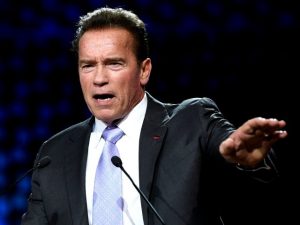 “Actor and environmental activist Arnold Schwarzenegger says he and a team of lawyers are set to sue major oil companies whose “product is killing people.” …I don’t think there’s any difference: If you walk into a room and you know you’re going to kill someone, it’s first degree murder; I think it’s the same thing with the oil companies,” the Terminator star said.” –Source

As crazy as his comments may sound, a narrative like this needs to become the norm in the mass-media if Rome is to be successful in their enforcement of a mark. And so we need to watch for big as well as the little signs like this because those of us that study Christian prophecy know that the Pope of Rome will be moved by Satan himself very soon to demand all people in the world keep Sunday holy to appease God who is sending the greatly increased global calamities that he has named “global warming.” The thousands of articles about Sunday laws that keep coming in confirms that hands down. And this is all besides the fact that global warming has been found to be bad science by tens of thousands of real scientists who unlike the handful of Vatican scientists, they don’t have a political agenda for everything they say and do.

As strange as all this seems to some we have to remember Satan is the father of lies and so it will always be bold faced lies that he uses against the masses. Need I remind you of the lies He told Eve in the Garden? When you step into disobedience lies become believable. Hence the reason most people trust the Pope, politicians and their apostate pastors today.

All the strange occurrences around the world from earthquakes, volcanic activity, strange weather to animals, birds, insects and fish dying in biblical numbers has been prophesied to happen right before Jesus returns and Satan needs hide this prophetic fulfillment so he can use it against those that don’t read Bibles as a very effective way to control them. But Satan, who has now been proven to rule the roost in the Vatican as per biblical, prophetic, historic and even eye witness accounts; he knows that he has very little time left to do his final work and he must ready the masses to kill those Christians who refuse to bow theRome’s admitted MARK of Sunday Sabbath. And so this is why Schwarzenegger said what he did and this is also why all the movies, video games and music has become so violent lately. He’s training his loyal and greatly deceived Armageddon troops as we speak. And so, as crazy at it comes off at first by Schwarzenegger, this narrative must begin somewhere so the media can build on the idea that global warming is killing people so as to convince the masses it has nothing to do with the return of Christ. It sounds nutty now yes, but they will build on this. Christian prophecy is that accurate!

So keep your eyes open and you will see Rome will push their political pawns and send their media cohorts to build on the chance to declare the prophesied death sentence upon all those that refuse to bow to the Pope’s admitted unbiblical Sunday Sabbath. Once done it will become the law of the land and all that refuse to obey will be legally declared worthy of death. Their reason to kill will be that unless those refusing to keep Sunday holy die, the calamities from God will eventually kill us all. And just as we saw how they used this method of attack against our Lord 2000 years ago, they will use the very same lie again in the near future. And that lie is what high priest Caiaphas stated in John 11:50 wherein he said that “it is expedient for us, that one man should die for the people, and that the whole nation perish not.” Then you will see all the 501c3 government pastors who built an image unto the beast in Rome join in unison to lobby for and then pass Sunday laws to supposedly appease the God of Heaven. And all those refusing to keep the Roman Sabbath will then be declared guilty of first degree murder and therefore worthy of the long prophesied death sentence by guillotine. Now do you see why there are thousands of guillotines in storage in the USA as we speak?

Yes, some that never read their Bibles or even studied Christian prophecy for that matter may think what I just said is a bit of a longshot; but before you respond with your comments in my blog or YouTube page, those in bed with Rome have already declared in writing that the Christian God is angry when you refuse to keep the Roman Sabbath of Sunday back when the Xmas Tsunami hit in 2004. They actually said that tsunami killed those 300,000 people because they weren’t going to church on Sunday! And did you notice? No one balked at that statement in the churches of the world because as also prophesied they are right now wondering after the beast in loyal obedience anyway. They actually think the Sabbath is Sunday and therefore believe Sunday laws would be a good idea. And since the mortal wound has been officially healed, talk in the media of obedient Christians being guilty of first degree murder will begin as prophesied. This is what’s next on the prophetic to-do list of the man of sin in Rome.

And so, as we see; a man that is no stranger to killing en masse in his blood drenched Hollywood movies, this man has obviously been chosen by Rome, the historic mother of all modern day politicians, to begin talking points towards the enforcement of the mark of the beast by declaring climate change is killing us and therefore just as the oil companies should be considered guilty of first degree murder, Rome can now build on this to proclaim the Sabbath keeping Christians who refuse to bow to the Pope will be considered guilty and then the final law will be passed to have us all killed. But those of us that study His Word and His prophetic truths know that when they do that, the Gideon band will go forth and glorify the Lord who protects them from any and all weapons formed against them just as much as He did the seven thousand who refused to bow to Baal in Elijah’s day!

“A number of Ph.Ds have written a book chapter asserting that doubts about the theory of human-caused global warming should be considered “real science.” You know, the idea of basing hypotheses on documented evidence rather than a political agenda. But the National Science Teachers Association wants nothing to do with such an approach. Its executive director, David Evans, has written a letter to members insisting they must teach the agendas of the National Wildlife Federation, the North American Association for Environmental Education, the Campaign for Environmental Literacy, the Center for Climate Change Communication and other activist groups. What they must avoid, he contends, is the information compiled by the scientists who wrote “Why Scientists Disagree About Global Warming.” –Source

This is a major fingerprint of the Roman Catholic popes. This has been how they have always dealt with truth that goes against their current agenda. They used this method during the Inquisitions, during Hitler’s reign and they are using them today directly before they get the masses to bow to their lies and bow to them in open worship so as to be sealed for hellfire right before Jesus returns.   END_OF_DOCUMENT_TOKEN_TO_BE_REPLACED 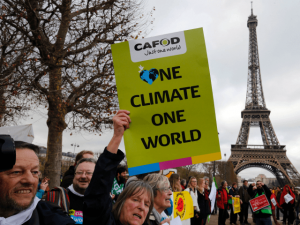 Oh perish (or Paris) the thought! How on earth could this ever happen? Just because students of prophecy have been declaring they would do this for well over a century and everyone breathing air on this very same planet also know the planet is in no way, shape or form “warning” as the Popes in Rome keep claiming, it doesn’t mean Christian prophecy is right. Or wait a minute… that’s exactly what it means.   END_OF_DOCUMENT_TOKEN_TO_BE_REPLACED

“The original movie wasn’t without controversy, as a judge in the United Kingdom said it could be shown in the nation’s schools only if schools alert students to nine statements “that are not supported by current mainstream scientific consensus.” Now that the promotions for “An Inconvenient Sequel: Truth to Power” have begun, critics have found yet another misstatement by Gore. According to the Media Research Center’s Newsbusters, it’s when Gore talks about the flooding caused by Superstorm Sandy at the site of the Twin Towers memorial in New York City. Gore claims its a fulfillment of his prediction in his original movie that a rise in the ocean level would contribute to flooding at the site. But that isn’t what happened.” –Source

That’s right! Even though Gore knows it’s a lie he will still declare it as truth because a political agenda grants them license to lie. (or so they think) But then this was to be expected seeing how it was Pope John Paul II who “hired” Gore decades ago to fabricate the lie that the planet was warming. To lie is the native tongue of every Pope due to the fact they are in fact Luciferian and so it is for any politician in his camp. And did you notice the timing in all this? I’m sure you did, but for the sake of those new to all this, just a few days after our current President removed all trace of the Vatican’s Climate Change fiasco from the official White House website we see Al Gore being once again on the Vatican payroll on global warming by announcing a new movie on the subject. In other words, this won’t be going away anytime soon. After all, they need this to be able to push the mark forward globally.   END_OF_DOCUMENT_TOKEN_TO_BE_REPLACED