Remember this video I did of a guillotine in a Puerto Rico’s BLM protest a couple weeks ago? It seems the protesters in Seattle that supposedly created their own country and are right now terrorizing anyone they can are promoting the use of guillotines. In this video you can hear one of their leaders shout, “Does anybody know what happened to the people who did not get on board with the French Revolution?” The crowd said “CHOPPED.” And did you know they just changed the name of their autonomous zone from CHAZ to CHOP?

“Bre Kidman unveiled a new campaign logo last week: a guillotine, the execution apparatus commonly associated with the French Revolution that was used for the beheadings of King Louis XVI and his wife, Queen Marie Antoinette. But fear not, Kidman, who hopes to challenge Republican Sen. Susan Collins in November, says using an image of the deadly device in campaign materials is not meant to be taken literally.” –Source

If it’s not meant to be taken literally, then why use it? The guillotine isn’t designed to chop and prepare salads nor is it a known political logo or statement. It’s designed to kill people. And according to Christian prophecy it will be used to kill many Christians that refuse the mark of the beast in Rome in the very near future. As for this woman actually being elected to the office of Senate, no I doubt that will happen. But then most doubted AOC would make it either. So time will tell. 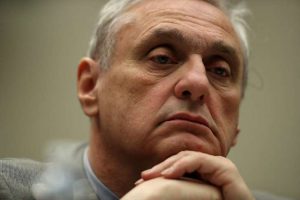 “A controversial federal judge thinks firing squads and guillotines should come back in style as the debate over executions in Arkansas rages on. Ninth Circuit Appeals Judge Alex Kozinski, in an interview with CBS News’ “60 Minutes” set to air Sunday, said conducting lethal injections is a sham that masks that fact that people are getting killed. …When interviewer Lesley Stahl mentions that Kozinski favors death by firing squad, the longtime justice quips: “Never fails.” Then she brings up his support of the guillotine — a late-18th century device that chops off the head. “Well, you know, it’s 100% effective,” Kozinski said of the device made famous for beheading aristocrats during the French Revolution. “And it leaves no doubt that what we are doing is a violent thing. If we as a society are willing to take away human life, we should be willing to watch it.” –Source

On my site I have a page that goes into detail about the 30,000+ guillotines in American storage. I also did a radio broadcast on this years ago when I had a show on a Network Radio station that had a few AM, FM, Shortwave and Internet radio outlets that somehow ended up on YouTube after some people made videos on it. I actually posted all the info I had on this early on when I first started the website and a friend alerted me it appeared to be bogus and so I pulled the info but never deleted it so as to verify my sources. I eventually found my friend was wrong. So years later I reposted the info about how the State of Georgia legalized the use of guillotines for death row inmates. There was a deceptive twist in the reasoning behind the passage of the Bill that later became law that was never mentioned in the law itself. They lied to the public on two counts to gain public approval for the use of the guillotine so as to (in my opinion) hide the Bible prophecy about Christians being beheaded for refusing the mark of the beast.   END_OF_DOCUMENT_TOKEN_TO_BE_REPLACED

“For some, it’s a dream come true: The ability to walk into a grocery store, grab anything you want off the shelves, and simply walk out. There’s no need to wait in line at a busy cash register. Your bank account will be automatically debited when you leave the store. It’s magical. …So the day is coming when people will be able to pull up to cashier-less stores in their driverless car, leaving their cashless wallet at home. All they will need is their smartphone and Amazon’s new app, called Amazon Go. The first Amazon Go pilot store is already open to the company’s employees in Seattle and it will open to the public in January. …While super convenient, Wood and others are cautioning to let the buyer beware. What you gain in convenience, you will lose in privacy.” –Source

Still think a cashless society is impossible? With this new app and literal storefront, you don’t even need to have your credit card on hand. Your cell phone is all you need! You just walk into the store with the phone and it tracks your every move and everything you literally pick up off the shelf so that when you walk out of the store your bank account can be instantly debited with whatever you purchased!   END_OF_DOCUMENT_TOKEN_TO_BE_REPLACED

I TITLE this piece “Filipino guillotine” to sound a warning that if we, Filipinos, do not wise up to what is happening in our country—state-sanctioned killings, crazy politics, corrupt generals—we could wind up without our democracy, our leaders, and even our republic.

I am haunted by the lesson of Italy, which went through an agonizing crusade to wipe out the mafia, organized crime and corruption and wound up with a monstrous national breakdown. END_OF_DOCUMENT_TOKEN_TO_BE_REPLACED