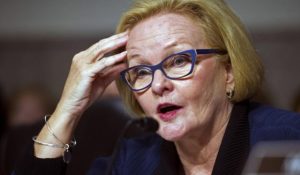 First and foremost, how many students of prophecy saw this coming? I can imagine a sea of hands raised high up on that one. As I have been proving for years on my Vatican Socialist Agenda page, a cashless as well as socialistic format in America is a must if they are ever to be able to enforce the mark. And her Bernie Sanders (a card carrying Socialist) inspired single-pay healthcare system is nothing new. Well, ok, it is new for America, but it’s nothing new in the world. Take Canada for example where they have a socialist healthcare system. Ask anyone in that country what the average time is to see a doctor and you will be shocked. But that’s not the issue here. McCaskill, like Sanders, are tooting the old worn out horn that Socialism doesn’t necessarily have to be the stepping stone to Communism. But as every Communist nation has seen come to fruition in their past, we are now seeing with our own eyes since September 11th; whenever you give up a few freedoms here and there to the Government, they usually go for more and never stop there. After all, once in power any politician will admit gaining more power is always a staggering temptation.  END_OF_DOCUMENT_TOKEN_TO_BE_REPLACED