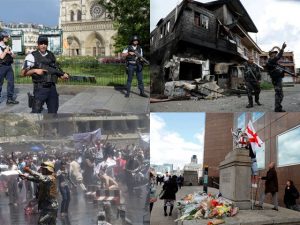 “The estimated 950 deaths and 1,021 injuries from the estimated 70 attacks that have taken place across about 20 countries during the first 13 days (as of June 8) of this year’s holy Muslim month of Ramadan have already marked the bloodiest Ramadan in recent years. In just one day (June 08), the death toll increased by 84 and injuries by 42. Jihadists believe martyrdom is doubly rewarded in paradise during Ramadan. Jihadist groups encourage martyrdom among their sympathizers and followers, promoting the belief that they will be doubly rewarded if they fatally castigate infidels during Ramadan.” –Source

This is overwhelming evidence that the Islamic religion is an exact duplicate to the Roman Catholic torturous and murderous fruits of their inquisition during the prophesied 1260 year rampage of the Popes. Yes, it was prophesied that the “great tribulation” that saw hundreds of millions of Christians killed for their faith would end in the exact year 1798ad. But it was also prophesied the Vatican church would regain its church and State power as well as begin its horrific killings again. Sadly today, most look at the 165,000+ martyred Christians each year as a normal fact of life in today’s society when it’s not normal at all for the human race to do this to each other. But it is normal in the last days as everyone alive knows is happening right now.   END_OF_DOCUMENT_TOKEN_TO_BE_REPLACED