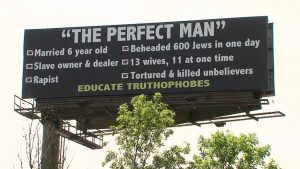 “A billboard in Indianapolis, IN is stirring controversy among local Muslim groups, says a Fox 59 report. The billboard, seen going southbound I-465 near the Washington Street exit mocks the prophet Mohammed as “The Perfect Man.” The billboard then lists six bullet points about Mohammed to describe him. The points include: “Married a 6-year-old,” “Slave owner & dealer,” “rapist,” “Beheaded 600 Jews in one day,” “13 wives, 11 at one time” and “Tortured & killed unbelievers.” …According to Fox 59, the Muslim Alliance of Indiana plans to raise money to put up its own billboard close by to spread a message of peace and kindness.” –Source

So let me get this straight. Nowhere on this billboard do you see the name “Mohammed” mentioned. All you see are statements about a “perfect man” that has done some pretty awful things and so all the Muslims are upset? Why are they so upset? It’s because they know all of what’s listed on the billboard are historic facts nary a single Muslim can refute and so instead of realizing the truth about Mohammed and his blatantly evil ways, they purposely ignore all the facts listed and get all upset at those people that posted the truth about their god? And yes, I said Mohammed is their god because like the Roman Catholic that worships and prays to Mary, the Muslims were also taught by the Popes to uplift everything and anyone by the Creator God and in their case, they chose Mohammed to be their god.  END_OF_DOCUMENT_TOKEN_TO_BE_REPLACED

A teacher in Austria will be charged for telling students Mohammed, the founder of Islam, was a child molester.

A middle school teacher in the Austrian city of Bregenz is facing criminal prosecution for her comments regarding the founder of Islam. Vorarlberg Provincial Councillor Dr. Bernadette Mennel confirmed that the teacher was facing a criminal complaint when she said, “yes, there is an allegation against the teacher,” VOL reports.  Source