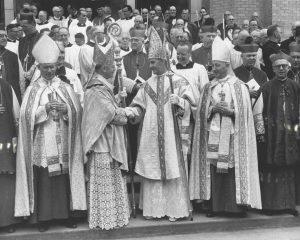 “As the U.S. Catholic bishops celebrate their 100th anniversary as an organized body, they look back at their previous century of work to help forecast what the next 100 years may bring.” –Source

I see no need to comment on the video other than to echo what the brother that sent the video to me stated. At 0:50 in the video Cardinal Dolan (ArchBishop of NY) says “it’s tough to forecast what the future is going to hold.” The only reason he says that is because as we all know Roman Catholic Popes, Cardinals, Bishops, Priests and Nuns do not read Bibles and so they do not know that Revelation 18 specifically states the forecast for the Catholic church is in fact absolute and utter destruction. And for those that do not believe me when I say they don’t read Bibles; see my Sola Scriptura page wherein they literally try to create doctrine out of thin air that declares the Bible is not to be trusted, see my words of the beast page wherein I have a section listing many quotes from the Vatican and its prelates where they declare in writing some rather hateful statements towards the Word of God as well as anyone that reads it, who they proclaim should “be destroyed.”  END_OF_DOCUMENT_TOKEN_TO_BE_REPLACED