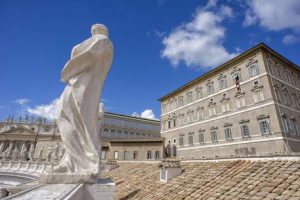 Now do you see why the Vatican is not just a church but the sovereign nation of Vatican city just as prophecy predicted? It allows them to use diplomatic immunity card when their homosexual priests molest, rape or even kill children in other nations. And for them to claim they will take care of this Monsignor Carlo Alberto Capella in their own Vatican courts is a farce. Do you recall Cardinal Law who was forced to resign as the leader of the Roman Catholic Archdiocese of Boston because of his causing the worst molestation scandal in the history of the planet that is still going on as we speak? After he supposedly resigned in shame he was actually promoted by infamous Pope John Paul II to head a basilica in Rome. And I say infamous because John Paul II was also protected and then promoted to Pope decades later by the Vatican after he joined the ranks of the priesthood after fleeing Nazi Germany for his war crimes via the Vatican ratline.  END_OF_DOCUMENT_TOKEN_TO_BE_REPLACED