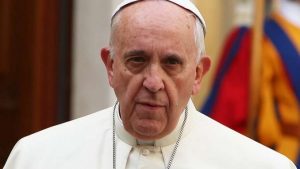 “Pope Francis told the Italian newspaper La Repubblica that the United States of America has “a distorted vision of the world” and Americans must be ruled by a world government, as soon as possible, “for their own good.” –Source

If you read on in the article you will find he is demanding all this because of his concern for our so called faulty immigration status. Yes, that’s just his excuse to start talking points; but besides the prophetic implications, of which I’ll get into in a moment, he currently wants an influx of Roman Catholics from Mexico and as he stated in writing more than a few times, his “brothers and sisters” in the Islamic faith also need to be allowed to funnel into the USA in large numbers. And as student of prophecy we know the end result of his agenda here but for now he needs to force America to open the borders so as to bolster his voting bloc in his favor by a landslide so as to use the second beast (USA) as prophecy stated he would in these days so as to use the power of the US to enforce his very soon coming mark .   END_OF_DOCUMENT_TOKEN_TO_BE_REPLACED