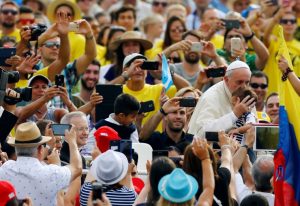 Islamic State has singled out Pope Francis as its chief enemy.

The Middle East terror group describes the pope as a “non-believer” in its latest publication. IS condemns him for “defending” homosexuals who it says have an immoral lifestyle, the Express reports.

The terrorists also attack the pope for seeking dialogue with “moderate” Islam. Such moderate Muslims include Imam Ahmed al Tayeb, of Al Azhar university in Cairo, Egypt, who IS says is apostate for describing Christianity as a religion of love and peace.

Pope Francis has insisted the war on terror being waged across the world is not a religious war. He admitted however that the world was at war, when he spoke to journalists on the plane to Poland for World Youth Day, after Catholic priest Jacques Hamel had his throat slit by two IS followers in France.

IS however insists it is waging a war of religion.

In a feature on Pope Francis headlined “In the Words of the Enemy”, IS condemns the papacy as “pagan” and warns: “The religion of Islam will continue to be spread by the sword.”

The group accuses Pope Francis of hiding behind “a deceptive veil of good will” in order to subdue Muslims through appeasement.

“While previous popes spoke against Islam due to the actual reality they faced, based on mutual enmity between the pagan Christians and monotheistic Muslims, recent popes – and especially Pope Francis – have attempted to paint a picture of heartwarming friendship, seeking to steer Muslim masses away from the obligation of waging jihad against disbelief,” IS says.

“Completely disregarding his own Church’s doctrine of judging homosexuals as immoral for engaging in the perverted act of sodomy, Francis has again sidestepped religion for the sake of public opinion.”

IS accuses him of following “some devilish interfaith fantasy, far removed from the truth.” It accuses him of trying to remove the Qur’anic duty to wage jihad against pagans.

Speaking at his weekly audience yesterday, Francis emphasised that faith in Christ brings salvation. It offers healing, restores right relationships and affirms the inviolable dignity of human beings, he said.