Leading US exorcists explain huge increase in demand for the Rite 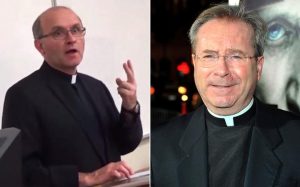 “In the US, over the past 10 years, the number of official priest exorcists has more than quadrupled from 12 to 50. But for two of America’s most active exorcists – Father Gary Thomas, whose training in Rome was chronicled in Matt Baglio’s book The Rite: The Making of a Modern Exorcist, and Father Vincent Lampert, whose work was depicted on Paranormal Witness – it is an ongoing struggle to keep up with the demand. In lengthy interviews with The Telegraph, the two exorcists discuss how the increase in drug and pornography addiction, failure of the mental healthcare system and a rise in popularity of “pagan activities”, such as using a Ouija board to summon the dead, are among the factors contributing to the huge increase in demand for the Rite.” –Source

First and foremost, as we all know by the Scripture that explains doctrine and the many passages that outline the prophetic characteristics of the Antichrist, it is clear to see that the Roman Catholic church can in no way be a Christian church. In fact, her fruits and multiple instances of being caught red handed worshipping Satan confirm the Roman Catholic Vatican to be the prophesied headquarters of Satan himself. So, when it comes to exorcisms, they can in no way possible cast out a demon, for Satan cannot cast our Satan. Nor would he want to because Jesus said in Matthew 12:26, “And if Satan cast out Satan, he is divided against himself; how shall then his kingdom stand?”

To verify the church of Rome cannot perform such biblical duties is the plain undeniable and well recorded fact that Pope John Paul II, the supposed leader of 1.2 billion Catholics and therefore the ultimate Catholic in all their eyes, who was later canonized as a “saint” no less, openly and quite graphically failed before an audience of highly esteemed Roman Catholics to cast a demon out of a young girl. The demon actually laughed at the Pope’s attempt and thrashed the “head exorcist” who tried to help out as well. So, their fruits are known as being unable to do as they claim.

As for the claim in the article regarding the “failure of the mental healthcare system and a rise in popularity of “pagan activities.” This is a common practice of those who have no faith. If they cannot do as they claim they place the blame on the doctors suggesting that no demon is present and it’s just a mental issue, and as for the Pagan ritualistic popularity? Seriously? The Roman Catholic church that literally admits in writing they have adopted Pagan rites into the church and “sanctioned them” as being of God? Don’t believe me? Click here for a few admissions by the prelates of Rome themselves. The popularity of Paganism would not be an issue if the Vatican didn’t embrace it as their own eons ago. But then.. this church is prophesied to be the author of CONfusion so. Not much can be said about that other than they just fulfilled yet another prophesied fruit of Antichrist.

The other basic and undeniable reality that exposes the Catholic prelates as very evil men is the way the Catholic church describes their method of exorcism. It lets the truth to be made known in a big way on this one. My point is, if you click this link, and I do very much hope you at least click it to see just how long that so called “rite of exorcism” is outlined to be performed by Roman Catholic priests. That link is from an official Roman Catholic website that lists the “Rite of Exorcism” for their visitors. Notice if you will that to just read that page without all the religious calisthenics would take all of 20 to 30 minutes to get through it all. That means it would take anywhere from 45 to 60 minutes to actually perform the “rite” in an actual church setting wherein you must wait on the congregants to do their part in the service.

That all being said.. how did Christ and or His apostles cast out demons?

Jesus did it this way:
Mark 1:23-26, “And there was in their synagogue a man with an unclean spirit; and he cried out,  Saying, Let us alone; what have we to do with thee, thou Jesus of Nazareth? art thou come to destroy us? I know thee who thou art, the Holy One of God.  And Jesus rebuked him, saying, Hold thy peace, and come out of him.  And when the unclean spirit had torn him, and cried with a loud voice, he came out of him.”

Paul the apostle did it this way:
Acts 16:18, “And this did she many days. But Paul, being grieved, turned and said to the spirit, I command thee in the name of Jesus Christ to come out of her. And he came out the same hour.”

If you do the math.. the Catholic church “rite of exorcism” would take minimum 45 to 60 minutes to perform in a church setting the “first” time it is performed. When unsuccessful, as they always are, they would repeat the process many times. A process that often takes many months if the family is poor, and years if the family is financially blessed. Eventually the priest just gives up out of abject failure and embarrassment and suggests the family seek a psychiatrist, or as is usually the case, the priest gives up when the money from the family runs out. And yes, after all that folderol, the soul is never freed of the demon. But when Jesus or His apostles command the demon out it comes out “the same hour.”