Pope urges Lutherans to set aside doctrine to work together 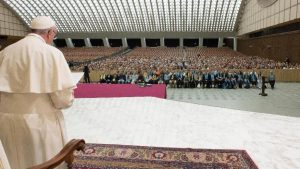 “Pope Francis is urging Lutherans to set aside doctrinal differences and work with Catholics to care for the poor, the sick and refugees as he lays out his vision for greater communion ahead of his visit to Sweden later this month. Francis greeted about 1,000 Lutherans on Thursday. The group was visiting the Vatican after Germany, where Martin Luther famously sparked the Protestant Reformation by nailing his 95 theses to a church door to challenge the abuses of the Catholic Church.” –Source

This will work for the Pope because in today’s world most religious leaders have ignored their forefathers and so their flock will follow them instead of the Lord. I have a list of ALL the forefathers posted here wherein you can see 100% of them declared the Pope to be either the beast or Antichrist himself. But because Satan will never let up in this relentless war of his, and sinceprophecy will be fulfilled, all the churches of the world, and sadly this includes the SDA church, will join hands with the Pope so as to set up their armed forces against the obedient people of God in what prophecy declares Armageddon. So be it, we know how that will come out; because just as that prophecy is the prophecy of their hatred towards us has been fulfilled, so will the prophecy that says they will fail in their final battle and Christ will win the long prophesied war and be forever King of kings and Lord of lords in the ENTIRE Universe.

The main reason the Lutherans, like all the Baptists, Methodists, Episcopalians and the Seventh Day Adventists see no wrong in joining hands with Rome like this is because the three frogs of Revelation 16:13 finally pulled up stakes from their original foundation set on the Rock which is Christ to set up shop on the same lily pad wherein the dragon, beast and false prophet hang out slurping up whatever idols their tongues can catch. None of them believe the Word of God or the warnings about who the Pope really is and how insane it is to join hands with a bloodthirsty man who openly says “set aside doctrine.” But for those few and blessed souls still temporarily trapped in those fallen churches, I have a few verses that may make you realize it’s time to “come out” of Babylon and any of her sister churches before her plagues fall upon you.

Sadly, not many will listen to the Word of God just as prophecy predicts. The fact 1000 Lutherans sat in obedience to meet with the Pope last Thursday declares this as fact. But, those that have kept their lamps well-trimmed will listen and come out because they actually read and trust the Word of God. And since they know Jesus Christ is the Word made flesh, following His written will declares to their hearts that it is a loving and blessed act to please their Lord; and so they will “follow the Lamb withersoever He goeth.” (Revelation 14:4) The fact they read their Bibles and actually have that relationship with its Author, unlike those in the pew next to them, they can see the writing on this wall just as easily as Daniel saw it for the blind that could not read it in his day. Maranatha!