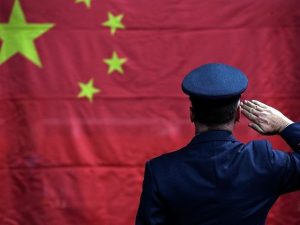 Now do you see what making friends with the Pope brings? Just as we have seen in every case when after a Papal visit or ‘private’ Papal discussion on any given political issues the real reason for the visit or the discourse is and always has been ‘religion.” Now, don’t get me wrong, I am not saying the Vatican seeks to bring Christianity to China. No, the Vatican is not a Christian church. Not only have they been caught worshiping Satan within Vatican walls, their fruits over the last 1478 years, and especially in the last generation confirms they are a literal vat of sin. This is why Catholicism was born in fact.

Basic reality is this. The reason the Pope is claiming friendly relations with communist China as of 2 weeks ago and has clamored after a “diplomatic breakthrough” since July of this year is because Communism makes for a good match when joined with Rome while going after Christianity. One can only imagine the insanity that will follow once the Pope starts playing the moral card and China does as the Pope commands. The “good cop bad cop” scenario works just as well in politics as it does in the interrogation room.

The fact this Pope stated in January of last year that he is “ready to go” to China confirmed to all watching with baited breath that the fix was in on the Vatican’s end. And so with break neck speed all heads turned to China to see how they reacted. And react they did! Once the Pope made the statement, the only thing left to happen would be China’s open statement of invitation; which I believe is the beefing up of it’s hatred of Christ and His people in their homeland. It shows the Pope that the leaders in China finally understand the Pope’s long hidden agenda to globally do away with Christianity.

China’s present persecution is nothing more than a show of loyalty to the Pope and so I have no doubt we will soon see a Pope standing in China right next to their current emperor with smiles on their faces from horn to horn. In fact, ex-Nazi soldier Cardinal Joseph Ratzinger, who later became Pope Benedict XVI to avoid prosecution of everything from rape to murder, said back in December of 1985 when he was helping Pope John Paul II that “Liberation theology [is the] The ‘absolute good’ (and this means building a just socialist society) becomes the moral norm that justifies everything else, including–if necessary–violence, homicide, mendacity.” -Cardinal Joseph Ratzinger ~  US News & World Report, Dec 2, 1985 (click here for photocopy of quote)

Why it took so long for China to realize Rome was already in agreement with them on Christianity is beyond me. But then I also understand how important it is to keep some people in the dark while performing global conquests so as to not rock political boats down the road. The timing is obviously right for China to become the next cog in the Vatican wheel and so we can expect an escalation of sorts to that end. Still, all of this was prophesied and as we will soon see, the Socialist society the Popes of Rome have been pushing for eons will come to fruition and a New World Order without borders will be born so as to make enforcing the mark that much easier. Satan needs to rule the entire world and as long as each nation has a sovereign wall of political difference around them, it won’t work. And as I shared in a recent video,  Rome will have their “Universal Jurisdiction.”