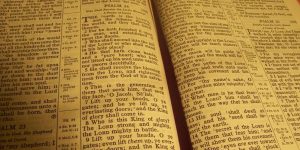 “The number of professing Christians is declining in America. And it’s not just because of the media, the public schools or even activism by atheists. It’s because Christians themselves are genuinely ignorant about the tenets of their faith, according to a new study. Americans, who still overwhelmingly identify as Christian, hold contradictory, confused and even heretical beliefs when it comes to God, according to the “State of American Theology Study 2016.” It found 64 percent agreed “strongly” or “somewhat” with the statement “God accepts the worship of all religions, including Christianity, Judaism and Islam. Sixty percent of Americans agreed with the statement “heaven is a place where all people will ultimately be reunited with their loved ones.” And only 40 percent of those surveyed agreed “hell is an eternal place of judgment where God sends all people who do not personally trust in Jesus Christ.”” –Source

Everything from Monday night football, to the video games, music and sitcoms has caused most Christians to put down their self-proclaimed “boring” Bibles for the excitement and lustful allurements of fiction and any other sinful activity they can find. It’s as if they will do whatever they can to kill time rather than open a Bible. And yes, fiction is sinful! Very sinful in fact. Think about that for a movement. What is fiction? It is defined as “The category of literature, drama, film, or other creative workwhose content is imagined and is not necessarily based on fact.” In other words, it’s all LIES.

So, when you enjoy a sitcom, movie, novel or even a video game with a plot it’s all based on lies. And who is the father of lies? Christians who read their Bibles know who he is. Jesus identified him in John 8:44 when rebuking the Pharisees He said, “Ye are of your father the devil, and the lusts of your father ye will do. He was a murderer from the beginning, and abode not in the truth, because there is no truth in him. When he speaketh a lie, he speaketh of his own: for he is a liar, and the father of it.”

So mom and dad.. when you let you child watch the TV, play a video game, or even read a fictional novel, are you sitting down? You mom and dad are actually allowing Satan to share with your child all the excitement that lies can offer so as to condition their precious growing and very influential minds into being more drawn to the lie than the “boring” truth. And yes, the Bible will become mind numbingly boring to your precious children after just a few years of gaping at a TV, video game or a novel.

Now for the clincher.

I wrote a book many years ago called “People Get Ready.” In that book I share 17 of my favorite prophecies that confirm we are in the last days. In chapter 12 I go into detail about how the Christians will eventually become complacent with sin and immorality will spread globally. Their Bibles will become boring to them and Hollywood will not only be enticing, the so called “religious” movies will take the place of the truth in Scripture. Have you ever seen my page exposing the “Passion of the Christ” movie that was easily exposed as fiction on scores of points? But today, most people trust that movie thanks to their Vatican controlled pastors offering a free (or paid for) viewing of that blasphemous movie in their own church buildings!

When I was around 20 years old I came across an article I read that the Lord reminded me of after I found Him as Lord many years later. That article was talking about the seminaries and Bible colleges of America. In that article they mentioned a poll they took of student ministers in 1977. That poll was taken by the “Pittsburgh Press” on Sept. 24th 1977 and it revealed that only “2% of American student ministers actually believe in the second coming of Jesus.” That was way back in the 1970’s!  These “students” are Pastors, and Bible college teachers today. Rome has infiltrated all the churches as prophesied and the easiest was they did was to start in the colleges. That way, even if a certain denomination was unwilling to bow to the Pope. The Jesuits (who promised to do this in writing) are the teachers in these colleges and the students, who for the most part have no clue they have been brainwashed, are sent off as fresh denominational graduates who will faithfully stands as pastors in the very denominations that refuse to bow to Rome. Compile all that with the media in America and you have the real reason Christianity has fallen mostly dead in the streets of our nation today.

The fact the majority of the pastors and preachers today do not actually believe in the second coming is not hard to uncover because most will lie and say they do believe so as to keep your donations flowing. But if you watch and listen closely for a while, their fruits will always give them away.

One major fruit to watch for will be the complacent mindset of the pastor. What I mean is, the “the media, the public schools and activism by atheists” has not been curtailed or even warned about by ANY mainstream pastors the last few decades as far as I can see. Yes, a few small churches with a desire to please God speak out. But their voices are drowned out by the preachertainers on the TV. And I’m not leaving out the coadjutors who stealthily speak out in the mainstream either. Watch them too and you will see a weak faith in the truth and a strong faith in the dollar. They will offer lip service from the pulpits to keep the pews warm with fresh trophies in the same way Jesuit coadjutor Alex Jones gives the people on the couches what they need to hear so as to stay on that couch. Rome knows if the people in the churches or the people on the couches feel like no one is doing anything to stop all the political and religious corruption, someone will step up. But if the pastors and some in the media claim to be in their corner.. both the pew and the couch remain warmed in complacency.

Most people don’t seem to realize today that sooner or later the prophecies of the Bible will eventually come true and what we see happening today is the long prophesied grand delusion that made the majority of the Christians miss the fact that the end times began 172 years ago as the prophet Daniel predicted. Most think it’s all going to start tomorrow, next year or 100 years from now. What they fail to realize is, eventually there had to be a generation wherein all that was prophesied will come to fruition. That time is NOW! That’s right! We are living in the very last days of time. And as prophesied, most have no clue.