2016: A time of political and spiritual miracles? 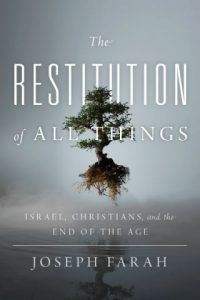 “I’m hopeful he’s going to do his best to “make America great again.” But it will take more than better governance in Washington to heal our land. That’s why I wrote a very optimistic new book – my first new title in six years. It’s called “The Restitution of All Things.”The title comes from something the Apostle Peter said in Acts 3: …Peter mentions – something all the prophets of old spoke about? It’s the fact that Jesus is returning to rule and reign with His faithful friends – true believers like you and me – for a thousand years on Earth.” –Source

First and foremost, Joseph Farah of World Net Daily fame is a false prophet. He’s not only declared and preached some very strange Vatican dogmas over the years, he’s also one to promote Rome as a moral house by promoting the book, “Islamic Antichrist” on his News site of which I expose on my site here by simply using some easy to research historical facts that match perfectly with Bible prophecies that speak of certain activities the real Antichrist will do that Islam could not possibly do. One of the main reasons is, many of the prophesied acts were fulfilled long before the so called “prophet” Mohammed, who was also a Vatican invention, was born. The fact the Pope sits on a throne that has carved upon it the following words should be alarming enough for most.

But for Joseph Farah to declare the “restitution of all things” has to do with Jesus Christ standing on planet earth at the second coming to reign on earth 1000 years lets the proverbial Catholic theology out of the bag. And I say Catholic theology because the same demon that moved the Pharisees of old to fall for this bold faced lie about the Messiah ending Roman rule to begin ruling on earth 2000 years ago is the exact same lie promoted by Vatican Jesuits for centuries. And now we have Joseph Farrah a well-respected “prophet” many claiming that day is about to arrive because Trump of all people is about to sit in the White House.

On my site I have a page titled “The 1000 Years EXPLAINED” that I didn’t have to make many comments on because the Bible verses that speak of the prophesied signs regarding what happened before, during and after the 1000 are that numerous. Why comment when the Bible says it all? If Joseph Farah or any Vatican prelate was to open their Bibles they would see that the lie Satan used 2000 years ago to get the Jews to believe Messiah would come to destroy Roman rule so as to bring about a millennium of peace is the exact same lie the Vatican and other false prophets like Farah are preaching and teaching today. The fact the Bible clearly says Jesus will NOT touch the earth at the second coming confirms an open Bible is nowhere near such pulpits. I mean come on already, this is basic prophecy 101 people! It literally says in 1 Thessalonians 4:17, “Then we which are alive and remain shall be caught up together with them in the clouds, to meet the Lord in the air: and so shall we ever be with the Lord.” But because most people don’t read Bibles anymore, most fall for this hook, line and pitchfork.

Now.. are you sitting down?

That’s right, it actually gets worse! Farah also share a list in his article wherein he says, and I quote, “Here are just some of the questions I address, using almost exclusively the Word of God for the answers.” Obviously, he is either lying about looking into the Word of God for those answers, or he is purposely using a Bogus Bible wherein certain verses have been deleted to shore up his Vatican dogma. In any event, notice three things on his list that he believes it ripe for addressing in modern society.

Prophetically speaking, Farah’s “restitution of things” is nothing more than a precursor to the prophecy of 1 Thessalonians 5:3 that says, “For when they shall say, Peace and safety; then sudden destruction cometh upon them, as travail upon a woman with child; and they shall not escape.” While Farah, the Pope and all those following their lead are basking in their long prophesied “peace and safety” due to their man-made “restitution of things” their destruction will come upon them in a way that will catch all of them 100% off guard!

What’s more important to you right now? Getting prepared for the return of our King, Saviour and Creator Jesus Christ by declaring the loud cry so as to alert the people about these false prophets? Or is it partying with your friends, smoking enough dope to bring on tunnel vision, or sewing discord among brethren so as to lower the way people view the strong Christians so as to vindicate yourself in the sin you know you embrace? Seriously, it’s always made me wonder why Satan and his people are making plans for his arrival with such zealousness, yet the ones who claim Jesus is Lord are so sidetracked they have no idea Christ is about to return and their lamps are running dry as we speak? It’s because only five of the Ten Virgins will remain foolish. The rest will be ready to proclaim, “Lo, this is our God; we have waited for him, and he will save us: this is the LORD; we have waited for him, we will be glad and rejoice in his salvation.” -Isaiah 25:9.

Want to join the “remnant of her seed” that are doing all they can to strive unto the perfection in Christ so as to be ready for the Latter Rain? If so, click here to join us on the real Sabbath day as we gather to worship the God of all creation in an online church service. – hope to e-see you soon. 🙂