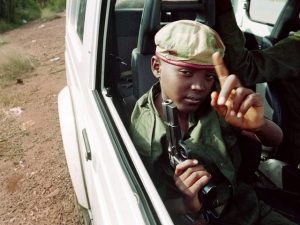 One 15-year-old boy known only as Ahmed said that the girls “scream and cry for help,” but the militants don’t care. “Sometimes they’ll be slapped and threatened with guns if they didn’t cooperate,” he said.

According to Ahmed, the jihadists accompany their demonstrations with specific instructions on how to carry out a rape.

“They tell us to remember to hold the girl tight on both hands, pinned to the floor,” he said. “They said we shouldn’t let a woman overpower us.”

The young soldier said that before one attack, his superiors told the militants to capture as many women as they could, promising that they would be allowed to “have fun” when they returned to their base.

“At first I didn’t understand what they meant by ‘you are going to have fun’ and nobody thought to explain,” said Ahmed. This was before his training in sexual assault.

According to Ahmed, encouraging young militants to have sex with captives is a relatively new tactic, since previously, the leaders forbade teenage soldiers from doing so, saying that women belonged to men and not boys.

The change in policy reportedly reflects a need to incentivize younger soldiers, especially now that a significant number of senior fighters have been killed off by the Nigerian military.

Adding insult to injury, a report by Human Rights Watch (HRW) released in October documented how many girls who had survived assaults by Boko Haram, then suffered sexual violence at the hands of officials at refugee camps in northern Nigeria.

In its study, HRW found that rape, sexual harassment, inducement into sexual activity by promising food, and other such violence against the victims of Boko Haram were shockingly regular occurrences among internally displaced persons (IDPs) in camps.

Members of the NGO interviewed 43 women and girls willing to discuss their experience of “sexual abuse, including rape, and exploitation” at the camp. Many of these accused an array of soldiers, police, and militia leaders of sexual violence.

Many of the African girls and women who eventually return home after escaping Boko Haram are stigmatized by their own communities because of the sexual violence they suffered.

These women are sometimes labeled as “Boko Haram wives” or even “epidemics” and lack organized services to help them recover from their experiences and reintegrate into their communities.