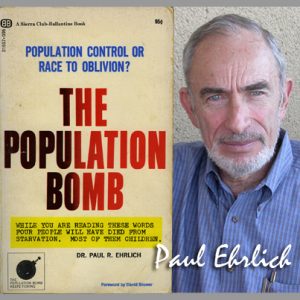 “The Vatican has invited the undisputed father of the modern, pro-abortion population control movement to present a paper at an upcoming Vatican-run conference. Dr. Paul Ehrlich, author of the 1968 bestseller The Population Bomb is scheduled to speak in Vatican City during the February 27-March 1 conference that will discuss “how to save the natural world.” The Stanford biologist champions sex-selective abortion as well as mass forced sterilization as legitimate methods to curb population growth. In his 1968 book, Ehrlich went so far as to defend forced abortion, writing: “Indeed, it has been concluded that compulsory population-control laws, even including laws requiring compulsory abortion, could be sustained under the existing Constitution if the population crisis became sufficiently severe to endanger the society.”..Organizers of the Vatican-run conference predict that if effective steps are not taken to reverse so-called man-made “global climate change,” then up to 40 percent of “all biodiversity on Earth” will be destroyed “by the end of this century,” including a “majority” of species of plants. …With the invitation of Ehrlich to address the conference, how the Pontifical Academies understand “social justice” takes on a sinister aspect.” –Source
Sinister indeed! But then this is the Roman Catholic church that killed hundreds of millions during their first global reign between the years 538AD to 1798AD just as prophecy predicted. The fact the Vatican has been killing hundreds of thousands of innocent Christians annually via their henchmen most know as Islam and the fact the Vatican has quite a few hospitals killing babies every day shows us the prophecy regarding this “sinister” beast in Rome has never changed and never will change. The only difference will be in how society accepts her bloodthirsty acts. And they will in fact allow for them across the board.
Don’t believe me?

Have you heard any main stream preachers demand the Vatican stop helping Islam invade every country on earth? Have you heard any preachers demand they stop killing Christians under the guise of Islam? Or have you even heard any preachers ask the Vatican to close their abortion clinics all over the world? Nope, nary a one. But, I just posted an article the other day wherein quite a few so called religious leaders have not only declared Planned Parenthood a good organization worth promoting, they literally said Planned Parenthood was doing a “sacred work.” And every single Roman Catholic that steps into the abortion clinics to prevent stretch marks or even the loss of a lover agree it’s a “sacred work” because after killing their innocent screaming babies, their lovers stay with them and their stretch marks never appear. So, getting those very same women and their lovers to go along with forced abortion is not going to be an issue at all since legalized murder is no big deal in their eyes, and so the man of sin in Rome has decided to invite the very man who wrote the book on how to do just that into the Vatican to speak! And still some so called religious leaders like SDA Ben Carson call him a holy man?! Not to mention of course the infamous SDA Conference Pastor BT Rice calling the Pope “your holiness” during a blasphemous Catholic Mass on camera years ago.

It’s as I’ve been saying for the entire 30+ years since leaving the Roman Catholic church. They don’t give a hoot about abortion clinics at all. The fact they operate them confirms that hands down. But the main reason they play both sides of the fence on this one is so they can have their hot button foot in the door at every hall of Congress. Any foot is better than no foot at all as it allows them to play the politicians as puppets. They know all about how using abortion can cripple or advance any political agenda they want as long as they control the very Senators they need to on that one issue who they command to vote yay or nay on any other political issue. It doesn’t even have to be about abortion. All they need is a pro-life senator in their hip pocket who has agreed to worship the Pope and so any Bill brought to Congress can be manipulated via that very same puppet Senator.