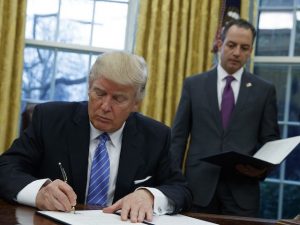 “President Donald Trump signed three executive actions this morning, killing the Trans-Pacific partnership, instituting a federal hiring freeze, and restoring the Mexico City policy, which bans federal funds from being used to fund abortions. “We’ve been talking about this for a long time … a great thing for the American worker,” Trump said after signing the order killing former President Obama’s signature trade effort.” –Source
The only reason I am posting this is because some questions have arisen in the minds of some as to why this happened in the way it did. Some students of prophecy know for a fact it can be a bit confusing when we look at Scripture and see how the Vatican’s New World Order will definitely come to pass and the TPP was one way to get the leaders of each nation in bed with the Roman idea of splitting the planet into ten separate regions so as to make sure the golden carrot being dangled is well funded. But as students of prophecy, we are not only to stand firm in the fact it will happen just as it was written because Christian prophecy is a declared fact, we must also be wise as the serpents that are behind all this crafty political banter by proclaiming the truth of our King Jesus while at the same time as gentle as the doves we have been prophesied to emulate so as to better appeal to the heart rather than the flesh.
Trump is now president. And so he is our new leader and being as such we must pray for the man’s office as well as his character just as we did all the previous presidents. I mention his character because everyone on earth knows how he loves to grandstand as well as have his name on everything he touches and that’s why he’s in that position. (I will explain further in a moment) We also need to understand that he does not like Obama because as mountains of documented facts have proven, Obama is not only a Muslim he was never legally our president the last 8 years. He was not born in the USA and now that his well-funded media machine is no longer being flooded with cash to puff him up, they no longer have the desire to shore him up and hide the facts for him, and so a new media game is about to start and protecting Obama and his political insanities simply isn’t it anymore. That all being said. Why is Trump nixing the TPP?

As far as I can see it, there are 3 reasons.
#1, Since Trump now has the power to do so, he will joyously liquidate anything Obama did in Office because he truly believes he was an illegitimate leader and therefore does not want him to have a confirmed legacy in America. #2, Trump knows the TPP deal is a bad deal for America and he can use that excuse to renegotiate the deal so as to make it more attractive to American businesses seeing how he is one of the elites who will benefit greatly from it. And that leads me to #3, which is removing Obama’s name from as much as possible by renegotiating everything from TPP to Obamacare. This will allow His name to be applied to some real whoppers in global politics that have real staying power.
Basic reality is, the foundation under the original TPP will remain, as it is one of the most powerful global deals ever to be made by man. But as Trump see it, it can be bettered and so he will go for it. And the way Obamacare was set up so as to assure every soul on earth takes part is another deal Trump wants to sign his name to for obvious reasons as well. His desire to showboat cannot be ignored here. His campaign proved that hands down.
As Christians we know that pride is one of the seven deadlies. (See Proverbs 6:16-19) And so it is here where Satan shines the most whenever he seeks to control any man or woman on earth. And what better man to assure the ten toes of Daniel find a comfortable sandal to wiggle in than one who places his name on every building he owns in big gold letters for all the world to see? Signing his name to some Vatican contrived deals Obama couldn’t structure well enough for the dying god of this world is one way Trump can place his name in big bold letters for all the world to see. The temptation to declare TRUMP has come to town is not something he wants to deny. Especially since the enemy of souls can make the excuse of how his children can benefit long after he’s gone.

Here’s the deal as it appears to be playing out
Whether Trump knows it or not, Satan will use him like he does anyone that grants him permission to do so. And the more powerful the position of the man the more damage Satan can do with that man. Seeing how Trump is a builder and one who knows how to make international deals, Rome needs his talents to make sure their NWO agenda goes global much quicker now. The present TPP as we know it will be scrapped yes. But the prophecy of the ten toes of Daniel will still be fulfilled. It will just be set up in a way wherein a man known to bow to the temptation of self-glorification can stand in its limelight while doing so and Satan can work well in that area. After all, something this grandiose is something Satan also seeks glory in because when those ten toes start wiggling in their ecumenical sandals, he knows the means by which the mark of the beast’s enforcement going global will be a done deal.
Obama had his talents and was the perfect man for the job when it came to following orders and reading well-scripted teleprompters. And as we witnessed the last 8 years, all he really did was help Rome’s homosexual agenda as well as increase the Islamic footprint in American politics. Not to mention his changes that brought a more socialist flavor to our legislative halls just as Rome commanded. But Trump’s talent in the international arena is a no-brainer for the Pope in this one and so Trump will be used as long as possible to do the things for Rome Obama could never do.

THIS JUST IN!
Right before I posted this blog online I came across an old article of Trump saying this about the TPP that confirms what I just shared here. He actually said, “I’m fine with free trade, but all of our trade deals are doing horribly. It’s free trade for the other side, not for us. So I like free trade but all of our trade deals are doing terribly. What I want is great deals. You know what my trade policy is? I want to make great deals for the American people. It’s a very simple policy. You can call it anything you want—you can call it free trade, you can come up with three different names—but it’s a very simple policy: Make great deals for the American people.” –Source<
In other words, as I said a moment ago. The New World Order of Rome will come to fruition. The TPP will disappear, but only the name will be changed to prevent the uneducated from realizing it’s going to remain business as usual in Washington D.C. as far as Vatican agendas are concerned. And yes, there’s a lot more to Trump’s reason for being there. The up and coming religious laws is one major cog in this wheel of Rome. And as the days go buy we will see how Trump’s “friends” in the church will be very beneficial towards that end. But then, we expected and even warned of this even before the election didn’t we?