Why Pope Francis Keeps Reaching Out to Mayors 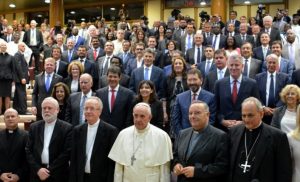 VATICAN CITY – When the Pope calls you to Rome, you go.

Dozens of mayors from around the world heeded the call in 2015, when Pope Francis invited them to the Vatican to discuss actions their cities could take against climate change and human trafficking. And it happened again last month, when Francis asked 70 mayors, mostly from Europe, to come and discuss local responses to the refugee crisis.

Both meetings amounted to follow-up on the Pope’s June 2015 encyclical letter, Laudato Sì. The 184-page letter expressed Francis’ concerns for the “common home” of humanity. In addition to strong words on the need to fight climate change, he included statements on the need for more socially inclusive urban planning.

The mayors meetings also reflected a new sense at the Vatican that mayors are action-oriented political actors, close to the public, and a group to engage with. As the head of state of Vatican City – the world’s smallest country – the Pope traditionally has met only with heads of state or ambassadors. Mayors were the first group invited to break this diplomatic protocol; Francis intends to host similar meetings with labor unions, teachers and other civil-society groups.
I spoke recently with the man in charge of hosting these meetings, Bishop Marcelo Sánchez Sorondo, chancellor of the Pontifical Academy of Sciences. Like Francis, Sánchez Sorondo originally hails from Buenos Aires, and is attuned to the idea of urban settlements acting as building blocks of humanity.

“Pope Francis wants to mobilize the society, and in order to do that it is necessary to start from its basic and early cells, such as the family and the cities,” Sánchez Sorondo says. “Mayors are the fundamental structures directly elected by the people, and they are the first to feel the real problems and give an opinion which is often against their national governments.”

The two-day December meeting was called “Refugees are our brothers and sisters.” It was intended as an opportunity for mayors to share their strategies for integrating refugees in their cities. The Vatican entrusted three of Europe’s most dynamic female mayors – Anne Hidalgo of Paris, Ada Colau of Barcelona, and Manuela Carmena of Madrid – to recruit other mayors to attend.

They brought in an interesting mix of people. In addition to mayors from other big cities such as Amsterdam, Copenhagen and Frankfurt, there were mayors from cities and islands of transit such as Ventimiglia and Lampedusa (Italy), Lesbos (Greece) and Tripoli (Libya). There were also small-town mayors, mostly from Italy, who hope refugees and asylum seekers will settle there and reverse longstanding declines in population.

“Pope Francis admired what some of these pioneering cities are doing,” Sánchez Sorondo says. “Riace is a brilliant example of a town which was dying and was saved by the arrival of refugees – men and women who contributed to restore this small town and to make it alive again.”

Sánchez Sorondo says the Vatican hopes mayors can play a decisive role in countering the wave of populism spreading across Europe. He says citizens trust mayors more than national politicians, and their actions can influence policies at the regional, national and even global level. “If mayors commit seriously, showing the problems to the citizens, people follow them,” Sánchez Sorondo told me.

The final statement from the December meeting amplifies his point, noting that many of the cities represented, such as Athens and Valencia, not only pre-date the existence of the nations to which they belong but also the Roman Catholic Church.

The statement calls on European cities “to embrace humanity, integration and solidarity,” and to create “a network of mayors capable of conceiving welcoming cities as shelters, capable of organizing safe and regular humanitarian corridors within the European Union, recognized by the international community, and capable of expressing solidarity.”

Unlike the first mayors meeting at the Vatican, Pope Francis did not personally meet with the city leaders in December. But he did thank them with a letter, which Rome Mayor Virginia Raggi tweeted. The letter affirms his appreciation for the idea of a network of mayors to work on refugee issues, and says: “My door will always be open to you and this new network.” Francis ends the letter asking the mayors to pray for him, or, if they don’t pray, to wish him good vibes, or “buena onda” as they say in Argentina.

While Sánchez Sorondo says he’s not sure what will come next with the Vatican’s growing relationship with mayors, what’s clear is that Pope Francis is creating a new platform for city leaders to engage in a global dialogue. He has a unique ability to both draw attention to an issue and inject the local leaders working on it with moral authority.

“As Pope Francis says, our role is to start processes,” Sánchez Sorondo says. “The most important thing is to start them and then see what happens next.”