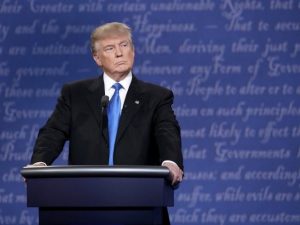 “In a blog post for Foreign Policy magazine, Rosa Brooks, a former Obama administration official, outlined four ways to “get rid” of President Trump, including declaring him mentally unfit for command or carrying out a military coup. Brooks is a Schwartz senior fellow at the New America Foundation, which is funded by billionaire George Soros’s Open Society Foundations. She served from 2009-2011 as Counselor to the Under Secretary of Defense for Policy and served as a senior adviser at Obama’s State Department.” –Source

And a large portion of citizens in America are most assuredly buying into all this just as expected because that’s what sheeple do. Truth is, this is what happens when the TV becomes a god in the houses of the people who refuse to think for themselves. They trust it and everything it says regardless of how fictitious it may be. Case in point: How many people believe the conspiracy plot lines of some Hollywood movies as if they are true directly after watching the movie? Not to mention how Hollywood also manipulates the minds of million in other less political ways. This is why everything from women wearing men’s clothing to promiscuity, be it heterosexual or homosexual has become the norm in America. Once it hits the big screen it becomes the new fad of the day.

Seeing how the American people have proven to be the very sheeple who will do whatever a Hollywood actor suggests no matter how immoral, things are about to get much worse. And by the way, 100% of all actors speak Satan’s native tongue. That being “lies” of course. (See John 8:44) In other words, to be a professional actor is to be a professional liar. Fiction is nothing more than a lie no matter how you slice it. And so it was bound to happen this way. When you bow to Satan and allow him carte blanche in society the people in that society will be puppets in the hands of Satan. That means, since the powers that be in America want civil war and anarchy to break out so as to enforce martial law wherein all freedoms are removed; they (the leaders) will not only gain more power, they will be protected like the Nazi leaders were when they locked down the people in their nation. You need to keep in mind our political leaders are very fearful people and they know they are greatly outnumbered and so, martial law not only grants them more protection against 300+ million angry citizens, it allows for the permanent Socialist format Rome has been demanding all along.

And just so you know… civil war will not come from what this ex-Obama official suggests, even though we already see citizens attacking each other on camera in these bought and paid for riots. (Also see this video) And yes, some may think the war has already begun as far our political leaders are concerned because of how without any consideration for those in the line of fire they continue to push this kind of behavior on.

All we see here is Satan’s long used hellish approach towards a prophesied end. What I mean is, just as we see him pushing bloody violence in Sports, Hollywood movies and even music to build up his troops for Armageddon so as to have complacent killers to surround the Gideon Band, all we see with this constant political upheaval in the News is a readying of the people to consider bloodshed as an option and then literally cause civil war by seeding their minds with the idea that it would be proper and even necessary to calm their well indoctrinated hearts. Only when that day comes, and it will soon, it won’t be for political reasons even though it was the politics of the day that caused it to happen. What I mean is, they can cause all sorts of political problems across the board they want. It’s bad yes, but not bad enough for your neighbor to seek your life for the benefit of his family. But once they mess with the economy wherein the rich can only afford the food on the store shelves, the politically brainwashed starving masses will storm their local government offices and blood will begin to flow in civil war.

Now do you see why we have so many concentration camps aka FEMA camps on u US soil? It’s not only been planned for – it was prophesied!