This is how Pope Francis keeps his peace amid Vatican ‘corruption’ 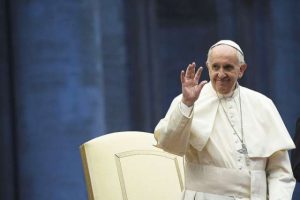 Vatican City, – In a lengthy, unscripted dialogue with 140 male religious superiors, Pope Francis admitted that there is “corruption” inside the Vatican, but said that despite this, his secret to maintaining peace comes from St. Joseph and a strong prayer life.

He also spoke at length on religious life, offering advice to the superiors on how to deal with different scandals in their communities, and explained why he chose youth and discernment as the topic for the next synod of bishops.

When asked how he keeps peace amid tension and opposition, the Pope jested, saying “I don’t take tranquilizers!” and said he’s learned to take the advice given to him by Italians, to maintain “a healthy couldn’t-care-less attitude.”

On a more serious note, however, the Pope recalled that during the general congregations before the conclave that elected him in 2013, “there was talk of reforms. Everyone wanted them.”

“There is corruption in the Vatican,” he said, but added that “I’m at peace.” If a problem comes up, Francis says he writes it down on a piece of paper and puts it underneath a statue of a sleeping St. Joseph he has in his room.

“Now he sleeps on a mattress of notes!” the Pope said, explaining that this is why “I sleep well: it is the grace of God.”

Other than entrusting his problems to the care of St. Joseph, Francis said he has his own daily regimen of personal prayer, including Mass, the rosary, the Liturgy of the Hours and scripture.

After praying, “the peace within me grows…my peace is a gift from the Lord,” Pope Francis said, telling the superiors that each person must try to discover “what the Lord has chosen for them” and must never avoid problems, but carry them with humility.

Pope Francis spoke to 140 Superiors General of male religious organizations and congregations (USG) Nov. 25, 2016, at the end of their 88th general assembly.

The text of the conversation was published Feb. 9 as part of the 4,000th issue of Jesuit-run newspaper La Civilta Cattolica, marking not only the milestone number, but also the paper’s expansion into four languages other than Italian: English, Spanish, French and Korean.

No speeches had been prepared for the meeting in advance, so the unscripted Q&A session, which lasted about three hours, was completely free and off-the-cuff.

When asked by the superiors what advice he had for them in terms of dealing with financial and sexual scandals in their congregations, the Pope said that on the financial point, “the Lord strongly wants consecrated people to be poor.”

“When they are not, the Lord sends a bursar who leads the Institute to bankruptcy!” he said, noting that at times religious congregations are led by an administrator whom they consider to be a friend, but who in reality leads them to “financial ruin.”

The basic quality of someone serving as a bursar “is not to be personally attached to the money,” he said, explaining that it’s also important to check into how banks invest money, because, as an example, “it must never happen that we are investing in weapons.”

On the point of sexual abuse, the Pope noted that frequently abusers have themselves been victims of abuse before committing their own acts, and “abuse is thus sowed into the future and this is devastating.”

“If priests or religious are involved, it is clear that the devil is at work, who ruins the work of Jesus through those who should proclaim him,” he said, but stressed the importance of recognizing that this type of behavior “is a disease.”

“If we are not convinced that this is a disease, we cannot solve the problem,” he said, and urged them to use scrutiny when vetting candidates for religious life, paying careful attention to whether they are “sufficiently emotionally mature” or not.

He told the superiors to “never accept in a religious community or diocese a candidate that has been rejected by another seminar or another institute” without first asking “for very clear and detailed information on the reasons for their rejection.”

When asked what he expected from religious and consecrated persons ahead of the 2018 Synod of Bishops on “Young People, Faith and the Discernment of Vocation,” particularly given the fall of the number of vocations in the West, Pope Francis acknowledged the issue as a problem.

“The decline of religious life in the West worries me,” he said, noting that it’s in part a problem of demographics, but on the other hand vocational pastoral outreach doesn’t seem to meet the expectations of youth.

However, aside from the fall in the quantity of vocations, Pope Francis said there is another thing that worries him: “the rise of some new religious institutes” that bring with them a load of new scandals and problems.

Francis clarified that he doesn’t mean to imply that “there should be no new religious institutes. Absolutely not,” but said he often wonders what is happening when he sees new communities pop up that seem to have a fresh approach, exhibit strength and attract a lot of youth, but in the end “go bankrupt” or are found to be coving scandals.

While some communities are good and work hard, others are not born from “the charism of the Holy Spirit,” but rather from “a human charisma, a charismatic person who attracts by means of their human charms.”

Some of these people, he said, are “restorationist” in the sense that they seem to offer a form of security, but instead “give only rigidity.”

Others, he said, are “Pelagians” in that they want to return to asceticism and penance, and seem “like soldiers ready to do anything for the defense of faith and morals,” but then “some scandal emerges” surrounding the founder.

“We know all about this, right?” he said, but noted that “Jesus has a different style. The Holy Spirit made noise on the day of Pentecost: it was the beginning. But usually the Spirit does not make much noise, it carries the cross.”

The Holy Spirit “is not triumphalist,” he said, saying the attitude doesn’t mesh well with a life of prayer, and that instead, God’s style is to carry the cross “until the Lord says ‘enough.’”

So rather than placing hope in the “sudden, mass blooming of these institutes,” Francis told the superiors to seek “the humble path of Jesus, that of evangelical testimony.”

Pope Francis also reflected on how consecrated people can contribute to the renewal of both the structures and mindset of the Church, voicing his conviction that consecrated persons “are at the forefront” in this area.

On the upcoming 2018 Synod of Bishops, the Pope, when asked how he came up with the theme, said that each participant in the 2015 synod offered three suggestions for possible topics to be discussed in the future.

Youth and the need for better priestly formation were both big topics, he said, but explained that for him personally, discernment was also a big issue to address. So when the title “Young people, faith and vocational discernment” was announced, he accepted it as it was.

“The Church must accompany the young in their journey towards maturity, and it is only with discernment and not abstractions that young people can discover their path in life and live a life open to God and the world,” he said, explaining that the theme is meant to “introduce discernment more forcefully into the life of the Church.”

When asked about the theme of the next three World Youth Days, which will culminate with the 2019 international gathering in Panama, the Pope said he didn’t choose the themes, but that they were suggested by organizers in Latin America.

However, he cautioned that while the Marian themes are important, they must focus on “the real Madonna! Not the Madonna at the head of a post office that every day sends a different letter, saying: ‘My children, do this and then the next day do that.’”

“No, not that Madonna,” he said, noting that “the real Madonna is the one who generates Jesus in our hearts, a Mother. This fashion for a superstar Madonna, who seeks the limelight, is not Catholic.”