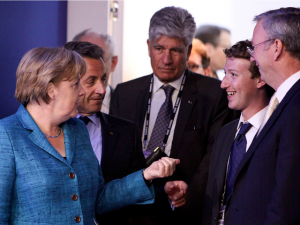 “Business Insider reports that Facebook is unhappy with Germany’s new hate speech law that would force social media companies to face heavy fines for failure to remove hate speech and fake news from their platforms. Facebook has argued that these strict new measures will result in legal and legitimate content being deleted from their platform in order to avoid the fines. …If Facebook refuses to comply with the law, the individual deemed responsible for the company in German could receive a personal €5 million fine, while Facebook as an organization could receive a fine of up to €50 million.” –Source

Oh how opinions change so quickly when the dollar bills piling up in Facebook’s vaults are being threatened. Just the other day Facebook’s Mark Zuckerberg announced he was going to Pay an ‘Army’ of Roman Catholic Filipinos to Police ‘Offensive’ Material on his Facebook servers, and now that Germany suggests large fines for offensive material on those very same servers he is upset that they would do such a thing. And he (as well as Germany) can use the excuse of “hate speech” and “fake news” to get just about any post removed no matter how truthful it may be. What gets me is how people still use Facebook after so much evidence has been posted as to how dangerous it is to post on those government owned and monitored servers. But then following the herd has always been a favored means to an end for the dying god of this world. Don’t believe me? When we get to New Jerusalem ask Noah what he experienced in his day.

And since it just happened; why not show just how offensive material can be on social media, that by the way won’t be censored? Have you seen the video I just posted of Kathy Griffin beheading Trump? It’s only a minute long as I came across it last night right before going to bed and I didn’t want to go into too much detail about the obvious end run Satan will use the video for. I’ve already seen a few News reports on it this morning and as expected some on the left are declaring free speech is a protected right in America no matter how many people are offended. Some even declared it “artistic expression” to ok it. You know… the same way they said hard core porn was “artistic expression” in the 70’s? One has to wonder if this video would ever be censored in Germany? After all, Snoop Dog’s video of him shooting Trump on camera never was.

Still, I can’t help to wonder how it all would have gone down in the mainstream had it been Obama’s or Hillary’s head being lifted up in that video? In any event, it’s graphically offensive acts like this that prod the powers that be to look into changing the US Constitution (as is prophesied they will do) so as to prevent people from being offended by present truth regarding all that’s prophesied to happen in this end time society we live in. Hence the reason Zuckerberg has an army of Roman Catholics policing Facebook so as to prevent present truth from reaching the ears of many poor souls trapped in Rome.

Griffin’s video was never pulled by any social outlet as of yet. Although she did claim to be asking her photographer to do so asap. But she also said this during the original video. “During the photo shoot, Kathy joked that she and Tyler would need to move to Mexico once the pics got released, for fear they’d be thrown in prison.” And so she knew it was wrong yet did it anyway. But then free speech is free as long as what you say or do is evil.

And then, what of the other toss of the coin wherein Griffin is emulating the Vatican contrived Muslim execution methods of today? She actually raises the simulated head of Donald Trump on camera just as an Islamic terrorist does. The only thing missing is her shouting Allah Ahkbar and then tasting the blood.

What she did on camera will probably (hopefully) get her forever off the air because she has been quite disgusting all along and especially towards Jesus Christ in her appearances and this includes during the New Year’s celebrations wherein she has been allowed to spew all sorts of disgusting “jokes” as she calls them since 2007 alongside openly homosexual Anderson Cooper? Still, all those videos remain available on a plethora of social websites including those in Germany wherein they plan to remove so called offensive pictures, videos and comments and then fine social media outlets for posting same?

And yes, I understand Griffin and so many before her “apologized” after posting their ill-conceived videos, pics and comments. But not only can’t the general public, and this includes unsupervised children, “unsee it” as was the plan all along, that video of a beheaded president will forever stay in the mainstream for even more children and naive “adults” to be adversely affected by it. It will never be censored at all. And because “free speech” will be upheld here, Griffin may not see any federal jail time at all even though she openly suggested the assassination of a sitting US president in that “artistic expression” of hers. What is this world coming to? That’s right.. AN END!