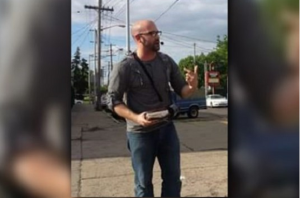 A pro-life street preacher in Michigan says the city of Grand Rapids is trying to keep him from witnessing to women outside abortion clinics and other public places.

Michigan Live reports Stephen Nylen filed a lawsuit this week challenging the city noise ordinance and repeated threats by police to arrest him.

Nylen said he feels called to preach outside city abortion clinics and in public areas. While serving in the U.S. Army, Nylen said he found “new hope” in Christ; and now he wants to share that hope with others.

Nylen’s attorney Stephen van Stempvoort said city officials have been targeting Nylen because of the content of his speech, and their actions are unconstitutional.

“Unfortunately, Mr. Nylen, who regularly engages in religious speech in public for a such as public sidewalks and parks, has been repeatedly warned by City officers that, if someone dislikes his speech complains to authorities about it, then he will be cited under either the Noise Ordinance or the Breach-of-the-Peace Ordinance if he does not stop speaking,” he wrote in the lawsuit.

He argued that the city noise ordinance is very broad and could be applied to “a host of speech that is unquestionably protected under the Constitution.”

According to the local news:

About twice a week, he took to public areas, including sidewalks, parks and summer festivals, to talk about his faith. Listeners ranged from appreciative to unhappy.

He said always stays on public property and doesn’t disrupt foot traffic. Last fall, however, police threatened his arrest if he failed to stop talking after a complaint about his behavior, the lawsuit said.

He has been told to stop – about 11 times – whether he was using voice amplification or not, he said. Of those encounters, about half were outside of an unidentified abortion clinic.

“Mr. Nylen believes that his faith requires him to bring a message of hope and compassion, and he believes that he has a religious and ethical obligation to speak that message to the issue of abortion,” van Stempvoort wrote.

Several pro-life advocates are involved in a similar court battle with the state of Maine. Earlier this month, a federal appeals court ruled that police may force pro-life protesters outside abortion facilities in Portland, Maine to be quiet under a state noise ordinance. The court ruled that the noise ordinance is constitutional and can be enforced because it is non-discriminatory.

The case began when Andrew March, pastor of Cell 53 Church, said Portland police told him to quiet his voice because it could be heard inside the abortion clinic. The ordinance in question is the Maine Civil Rights Act, which makes it a violation to intentionally make noise that can be heard within a medical treatment facility.

The city and state have been trying to censor pro-lifers in a number of ways. In 2013, the Portland City Council enacted a 39-foot “buffer zone” around abortion clinics at the urging of Planned Parenthood, LifeNews previously reported. However, a judge later struck down the ordinance after pro-life advocates sued.

Pro-life advocates also have had problems with speech violations in several Canadian cities.

In May, the city of Prince Albert refused to allow pro-life advocates to fly a flag outside city hall – breaking a 20-year precedent. The city allows various groups to use its flag pole to raise awareness for their causes, and had no problems with the pro-life flag for the past 20 years. This year, however, abortion activists lobbied city officials to refuse to fly it.

That same month, city leaders in Ottawa, the nation’s capital, took down a pro-life flag for the National March for Life in Canada after they initially agreed to let it be flown outside the Ottawa City Hall.