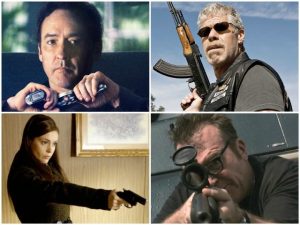 “Hollywood stars continued to vilify and attack gun owners and the NRA following the horrific mass shooting at the Route 91 Harvest country music festival in Las Vegas Sunday night that left at least 59 people dead and more than 500 injured. …Within hours of the shooting, several celebrities took to social media and called for gun control. Notably, pop superstar Lady Gaga said “blood is on the hands of” Congress and President Donald Trump if they don’t unite and enact gun control legislation.”- Source

As expected and like I said on Monday in the newest video I maderegarding how I couldn’t find a single article worth commenting on in the News that wasn’t all about the Vegas shooting; today three days later it’s no different. Even though precious souls were lost and hundreds were wounded, the mainstream News is still milking that ratings cash cow for all its worth and the Hollywood actors, who anyone with common sense knows are literally bought and paid for professional liars, are now chiming in to do all they can to make things much worse for the common man by demanding stiffer gun control laws everyone in Chicago, which has the most stringent gun laws in the nation knows it’s all a farce. And no, I am not being sarcastic when I say Hollywood actors are professional liars. That is the truest definition of a Hollywood actor known to exist. Seriously, everyone knows Sylvester Stallone isn’t a green beret type drifter who shoots up bad cops in every small town he drifts into each weekend, and Arnold Schwarzenegger is not actually a robot wrapped in human flesh from the future.

This article that is filled with tweets from Hollywood celebrities, who by the way are doing all this because the politicians fear another landslide failure in 2018, is nothing more than political propaganda hell-bent on creating and unarmed Socialistic format in America under direct orders of the father of corrupt politics and the political god of every high ranking politician in the world. That’s right, I am speaking of the man of sin in Rome, the Pope himself. But what gets me the most annoyed by all the back and forth in the media that is packed with bold faced lies via Hollywood is how they can literally make people that worship celebrities believe the lies they spew are actually truth simply because some multimillionaire actor says so.

Take for example how the hypocrites in Hollywood makes excuses when confronted by people concerned about gun violence in movies and the fact they keep making the most bloodiest movies known to man, these actors claim such movies have no impact on society whatsoever and cannot be the reason violent crimes have increased. Common sense dictates that if they had no impact in society as they claim they wouldn’t be making billions of dollars each year with those movies. For them to say the guns and violence in their movies don’t influence crazed people who actually shoot and kill their neighbors, is like saying porn doesn’t make perverted people want to have sex with their neighbors.

The basic truth in all this is, they do in fact have an impact on everyone from the little child that kills a sibling to the angry grandparent that kills a grandchild and they know it. But because they are so good at lying, hence the reason Satan grants them their riches, they not only get paid to lie even more to cover their bloodstained tracks, those that worship them are further manipulated into fashioning their own lives to depict the celebrity they worship. Besides the violence they foster, the fact people spend billions each year to buy clothing that makes them look like their favorite celebrities, cut their hair to match their favorite movie or rock star, or even drive a certain model car they saw used in a film proves they are lying through their teeth. And if they lie once, they will simply lie again. After all, it’s what they get paid for.

Now do you see why most Christians and just about everyone in the obedient remnant churchhave stopped watching TV, going to the movies, listening to worldly music and stopped buying violent video games? When you have eyes that see, all the lies in the world cannot hide the fact that as it was in Noah’s day, it is today. And so the lies will for the most part be believed by those who prefer them as their comfort zone. But the small number that follow the Lord Jesus Christ will not only believe the truth; they will be ready to receive Him as King and Saviour on that great and dreadful day He returns because they know clamoring after worldly things only gets them ready to die in the world.

Additional Articles Confirming we are in the Last Days:
VIDEO: Dire climate change predictions that have NOT come true * VIDEO: As expected~Late night talk’s call for gun control * 143 arrested after protest blocks St. Louis highway traffic * Rep. Norman: America Needs God, Not Gun Control After Las Vegas * Yahoo Says 2013 Breach Affected All 3 Billion of Its Accounts * UK to Imprison People Who View ‘Far-Right Propaganda’ Online for Up to 15 Years * Vegas shooter (like all others) was on AMA drugs! * Shooter in Vegas massacre was a longtime fed * Report: Obama used IRS to push Obamacare * Moderate? Muslim Brotherhood affirms aim of ‘caliphate’