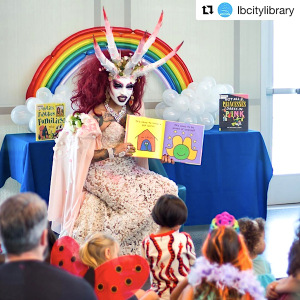 Do you recall this article I posted on my homeschools spurs page back in November of last year? No, you’re not hallucinating, that’s actually a homosexual man dressed as a woman possessed by a demon with five horns literally reading an LGBT story to precious little children in the Michelle Obama public library in Long Beach, California. As expected some of the children were very happy and entertained by all this. But then this is to be expected if you have ever watched modern day cartoons, read a comic book or seen a DC Comic movie wherein all sorts of demon images are made to look as heroes for the children. As also expected some of the children have been adversely affected, and yes as per Biblical jurisprudence some of them have been openly possessed by the demons their very own parents allowed them to play with and now we see boys as young as 10 years old not only dressing as drag queens, this young boy literally started a drag club for kids in New York City! And it gets worse if that’s actually possible.

In any event, it’s happening exactly as Jesus prophesied. He said it would be as it was in Noah’s day right before the flood that killed them all for legalizing homosexual marriage and it’s insane lifestyle worldwide. Jesus also stated it would be as it was in Lot’s day before the flaming brimstone rained down upon them for their open feasting upon strange flesh. And we must not forget the homosexual resort of Pompeii that was buried in volcanic ash wherein the Roman soldiers that destroyed the Temple in 70AD happened to be visiting that day. We now see the exact same homosexual perversion spreading all over the world and especially in America right before the Eastern sky rips wide open.

And so please pray for these manipulated children and their sin sick parents. Also pray for all those parents out there that see what we see but are having a hard time getting their children out of the American school system wherein all children are now preyed upon as playthings by the teachers, administration staff and yes even the United States Government who is funding all of it to make sure it cultivates within the children a mindset that when they are old enough to vote, all of this will be normalized.