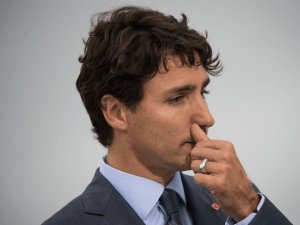 Ever wonder why when political officials or Hollywood celebrities with a political voice visit war torn areas of the world yet they never seem to be molested by the ones they keep claiming are our enemies? They are never prevented from going, never harassed while there or even injured in any way in what they claim is a literal war zone? Check this article out! Trudeau who is actually a Roman Catholic was caught vacationing on the private island of an Islamic leader!

Now, even if you’re not a student of prophecy and only skimmed over the prophecies of the Bible out of curiosity one day and found how all the world will wonder after the beast and do his bidding in the end; then even you can see now as it was prophesied long ago that the leaders of the nations in these last days are all going to be working together for the same demonic cause of their political god in Rome that the Bible defines as the man of sin. Hence the reason they all bow to him in worship on camera. Trudeau had no fear going to a terrorist owned private island because they are partners in the same crime. And thanks to the Pope’s work with Islam, they are also partners in the same church.

And yes, this is also why all the churches that have joined with this same man of sin in Rome are right now pushing Islam by declaring Allah is God. One can only imagine how long it will be before Shariah law is sanctioned by the apostate leaders of the Christian churches. After all, American courts have been legalizing it for years.

Truth be told, being under their 501c3 contract with the second beast of Revelation, which all students of prophecy know is the USA, these government approved pastors have no choice but to do as there are told. And because of Jesuit infiltration, most will do so for mother Rome as their oath confirms. Basic reality is, if the 501c3 pastors who are not Jesuit implants and are merely bowing to Rome out of fear refuse to do as their elected leader says to do, as per their own contract they can lose their precious tax free status wherein they make a ton of money each year at tax time. And as is so obvious, none of them will jeopardize their green goddess of cash. These preachers of filthy lucre will do just as they were prophesied to do.

And so like Trudeau who sees no problem with hanging with Islam, the wolves in sheep’s clothing will also stand with Islam.

Additional Articles Confirming we are in the Last Days:
SDA Leaders join with Pope and all Denominations in new Global Alliance (See Photo #6) * VIDEO: Indiana church deploys armed security team during services * Two-thirds of Christians in new survey say they have been spiritually abused * VIDEO: The games on your phone might be listening to you * VIDEO: Mongolia Pollution: Capital Ulaanbaatar sees severe air pollution * VIDEO: Bus plunges off cliff and kills 51 in Peru * VIDEO: This woman’s identity was stolen to help repeal net neutrality — and yours might’ve been, too * FYI: Facebook Says It Is Deleting Accounts at the Direction of the U.S. and Israeli Governments * Is YOUR State REAL ID Compliant? * VIDEO: Trump: “In America we don’t worship government, we worship God” * Regulate social media – just like other media * Climate change: this is the worst scientific scandal of our generation* FYI: (RE-POST) How to Permanently Delete a Facebook Account * Man who jumped from Aqua building was Ohio priest under investigation * VIDEO: New U.S. Ambassador presents her credentials to the pope * FYI:VIDEO: UK To Jail Viewers Of “Far-Right Propaganda” | Amber Rudd | Terrorism * A Catholic Priest in Wisconsin Reveals a Secret: ‘I Am Gay’ * India Is Likely To Become The First Digital, Cashless Society * CDC preparing for a nuclear attack * How Facebook abuses intellectual property