CNN Promoting Worship of the Pope 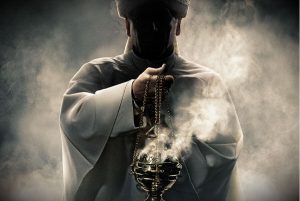 Some of you may recall a video I did a little over 4 years ago wherein I showed the Scriptural and historic proof that the mortal wound that was administered to the Pope back in 1798AD in the exact year the Prophet Daniel predicted was finally healed. As expected, no one in any 501c3 church or ministry that claims to understand or even preach prophecy ever said anything about what happened back in January of 2014 that confirmed what obedient students of prophecy declared regarding the wound being healed many years prior that I listed on my main site. And now we see CNN, a News Network known for their fake news, has decided to create a docuseries about the Pope being the most powerful man in the world wherein the Pope is declared a man of his own word instead of God’s Word just as Jesus predicted he would do in John 5:43 so as to bolster their network’s ratings while at the same time confirm what we stated years ago that the mortal wound is clearly healed. When you get time, you seriously need to check out the trailer they just released for that docuseries glorifying the Pope as another god on earth on Pastor Craig’s YouTube channel.

So, how did it get so bad wherein a man drenched in sin and criminal acts is declared a global moral leader? How was the Pope of Rome able to get his wound healed so quickly? It was all thanks to the many false prophets most people think are their pastors today. They refuse to speak of the Pope in Rome because on one hand they fear losing their tax free status, and on the other hand they can’t sufficiently preach or teach the prophecies because you can only understand them when you’re obedient to the God that wrote the prophecies.

Worse yet, when the Lord moved upon a people in the prophesied ninth hour described in Matthew 20 who then go forth in obedience in the early 1800’s and expose the Popes of Rome for decades as 2 Thessalonians 2:3 prophesied they would so as to alert everyone on earth today who the man of sin is; this ninth hour church was also prophesied to do as the Jews of old did and walked away from their God. They too fell into apostasy and literally joined hands with Rome to the point of documenting their agreements on paper. These men in the ninth hour or SDA church as most known them by were called of God to declare present truth so as to ready the people for the coming of the Lord. But they  not only refused to do their ordained duty, they openly honor, promote and protect the Popes of Rome by declaring he is no longer as prophecy says he is. And if that’s not bad enough, they even created an image to the beast in Rome just as the Lord prophesied they would so as to further lock down their state of defiance against the Lord their God. In fact, they are right now helping Rome to gain popularity as well as prevent the people still in the SDA church from knowing that since the wound was healed, which they never speak of, and the Pope’s popularity and power have grown off the chart, they hide from their own brethren that Sunday Laws are just around the corner.

I have a video I made back in November of last year wherein the  SDA President, Ted Wilson stated on camera Sunday Laws are not coming anytime soon even though we have thousands of articles and videos of church and political leaders pushing for Sunday laws right now. He actually made it a point to stand in front of the camera that day just to make that claim so as to hide what’s really happening behind Vatican walls as we speak. The SDA leaders, all the Protestant leaders and every politician known to man are right now doing all they can to puff up the Pope as well as promote religious banter in politics so as to bring about the prophesied religious laws. This is why CNN just announced their new docuseries. It will catapult the Pope of today as a godly man in the eyes of the people that trust their pastors above their own God by making the Popes of old look as evil as they truly are while at the same time make the current Jesuit Pope look as holy, blessed and trustworthy as they can.

And for those confused as to why the Pope needs religious laws in America and then all nations of the world so as to enforce their mark; notice how every time the mark of the beast is mentioned in prophecy the word “worship” is right there with it! That’s no mistake! That my brothers and sisters is prophecy being fulfilled right before your eyes!