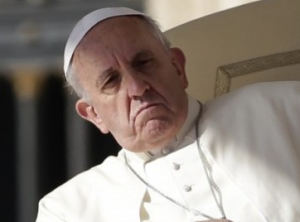 “Pope Francis told the children of the world to “keep shouting” and not allow adults to silence them. Seriously? …Pope Francis, …urged young people on Sunday to keep shouting and not allow the older generations to silence their voices or anesthetize their idealism. Francis spoke a day after hundreds of thousands of young Americans and their supporters answered a call to action from survivors of last month’s Florida high school massacre and rallied across the United States to demand tighter gun laws.” –Source

The only “older generation” these kids know are their very own parents and the Pope knows this! I am also sure he has seen the articles and videos of parents getting very upset at the teachers that conned their kids into leaving class to help bolster a political agenda. This is exactly how the Pope commanded Roman Catholic Emperor Adolph Hitler to use the children to promote gun control in his day. It was done to prevent the people from standing up against the State and the end result was the children literally turned their own parents into the Nazis to be killed! And just as Hitler had children standing around him when he promoted gun control in propaganda ads, Obama did the exact same thing when he signed the executive orders on gun control.

But that’s just a bunch of political folderol that will allow the Pope to control the masses in the USA so as to enforce their mark here first as prophesied. And so we are prepared for that as it is expected to happen. But what’s worse is that this Pope is doing as the Pope in Hitler’s day did by openly commanding the children break commandment #5 wherein it says in Exodus 20:12, “Honour thy father and thy mother: that thy days may be long upon the land which the LORD thy God giveth thee.” And for those that believe the commandments are strictly Old Testament, it says in Ephesians 6:1-3, “Children, obey your parents in the Lord: for this is right.  Honour thy father and mother; (which is the first commandment with promise)  That it may be well with thee, and thou mayest live long on the earth.”

The Bible clearly says in Proverbs 22:6 that parents must “Train up a child in the way he should go: and when he is old, he will not depart from it.” But this Jesuit Pope who took an oath that speaks about ripping children from the wombs of women so he can crush their heads against the walls is declaring they should ignore all that is written in the Bible and do as he commands instead? And thanks to the US Government which is the second beast of Revelation having the power to brainwash the children, the parents are on the very precipice of losing all hope to bless their children with Christian morals and simple common sense because #1, their schools pump everything from homosexuality to evolution into their impressionable little minds on a daily basis, to #2 a Pope who protects the very pedophiles that rape them in the millions telling them to disobey their parents so he can have better control over the people when it comes time to enforce his long prophesied mark!