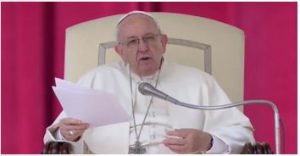 “VATICAN CITY – Pope Francis criticized people he called “fake Christians” and “Mafiosi” on Wednesday. The Pope held his weekly audience in St. Peter’s Square at the Vatican. Speaking to thousands of faithful, Francis said “fake Christians” who claim to follow Jesus but who lead corrupt lives will “meet a bad end.” He called out “Mafioso Christians,” saying they “carry death in their soul and to others.” –Source

While all that may be true, one has to keep in mind that the Pope of Rome is in fact the prophesied man of sin and so he will mix truth with error so as to lure many into his camp. And so just as a Christian allows the Holy Spirit sent forth by the ever living God of creation to move their tongue when speaking truth unto the people the Lord sends their way, so will the Pope use the unholy spirit of his dying god to speak lies unto the people sent his way. And so when he speaks of being a good Christian he is actually talking about being a good Catholic and anyone refusing to do as he teaches is a fake Christian. We must do as Jesus stated when it comes to examining the fruits of those who claim Jesus to be their Lord. After all, was it not prophesied by Paul in 2 Corinthians 11:4 that many will “preacheth another Jesus, whom we have not preached…” And did not Jesus Himself state in Matthew 24:11 that “many false prophets shall rise, and shall deceive many” in our day?

And so with that said. Let’s see if Roman Catholicism actually preaches the Jesus of the Bible, or do they in fact preach “another Jesus” as Paul warned. And since the Bible says in Isaiah 8:20, “To the law and to the testimony: if they speak not according to this word, it is because there is no light in them;” Let’s us look at what the Pope defines as Christianity via their own Catholic teachings. For if what he teaches is not in the Bible, then it has not the light of approval from Heaven and therefore not to be believed by obedient Christians.