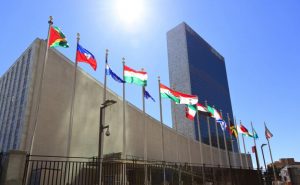 In the article they go on to say no one will be allowed to have individual rights. This confirms the discernment of God’s obedient remnant, who have been declaring for decades that none of this can go down without a Socialist form of Government. What we have been preaching all along has only recently been spoken of in the mainstream media as the coming norm and this article literally stated when speaking of the One World Government that “there was a socialistic thread in its founding document” and that is why they tabled it for decades so as to ready the people for the change. And now that Socialism is all the rage in today’s politics, the means by which to finally go forward is now upon us. And when it comes to removing the rights of the individual, it will only be possible as the article says, when “individual liberty is submerged in a scientifically determined collectivist mindset with final decisions in the hands of the devilish, all-knowing Big Brothers.” Which the government schools have been indoctrinating the students towards for decades to the point the media now feels they have a sanctified freedom via the courts to regurgitate daily on every News channel knowing most over 18 agree thanks to their teachers brainwashing them.

Was it not declared long ago that we the individual Christian will have to deal with the same hatred and persecution as did our King, Lord and Saviour Jesus Christ? When speaking of our Lord it was declared by the Pharisees of old in John 11:50 that “it is expedient for us, that one man should die for the people, and that the whole nation perish not.”

And keep in mind. The website this article was posted on is a Roman Catholic website which has no clue regarding the prophecies of our Lord. They are merely reporting on what they see as an injustice unto all. The Lord has allowed this to be proclaimed in this way so as to lend credence and vindication unto the present truth message His obedient bride has been ordained to proclaim the last few decades. What’s very strange here is that they nearly echoed what students of prophecy have been saying all along when they said “they believed in a one-world government that would grow out of the United Nations.” One can only wonder if the laughing of the scoffer has finally stopped by now.

If you’re a student of prophecy, you know that before this beast power gathers all the nations around the world together under ten kingdoms, which the ten horns of this beast in Revelation 17 as well as the ten toes of Daniel 2 speak of, certain prophesied events must come to fruition first. That means, if the Lord allows the Pope who controls the U.N. to bring about the long prophesied one world government by 2030, we have precious little time left because we know before that New World Order becomes official the loud cry must go forth globally and then the mark of the beast must be enforced before because prophecy says that one world government which is controlled by the Pope comes to fruition at the commencement of that “one hour with the beast” which according to prophetic time lasts 15 days. (See Ezekiel 4:6 and Numbers 14:34) And when that hour ends, plague #7 falls and the eastern sky splits at the return of Jesus Christ.

In other words, the people of God have a lot less time to do the work than many originally assumed and sadly, 100% of all the 501c3 preachers even contemplated. In fact, their leaders have openly admitted on camera that they see nothing regarding all this in the current pipeline. Now do you finally see why the Lord has been moving His obedient bride to not only trim their lamps each and every day? He has also moved us to speak on such things the last few decades.

Now yes, some believe the one hour with the beast happens right before the plagues begin which means we would have one less year to work. But I ask how can this be when we know that the ten horns of this beast are the same as the ten toes seen in the vision of the prophet Daniel, who when he “sawest the feet and toes, part of potters’ clay, and part of iron …(it was) in the days of these kings shall the God of heaven set up a kingdom, which shall never be destroyed: and the kingdom shall not be left to other people, but it shall break in pieces and consume all these kingdoms, and it shall stand for ever.” (Daniel 2:44)

The prophecy clearly says it is “in the days of these kings” that Jesus destroys this one world government at His return. But to further lock it down, notice how this image with the ten toes was destroyed in Daniel 2:45. It says “the stone was cut out of the mountain without hands, and that it brake in pieces the iron, the brass, the clay, the silver, and the gold…”

If the hour with the beast was to end before the plagues fall, then why is the clay that is mixed with the iron in the toes present when that stone that represents the return of Jesus Christ hitting that clay as well? Again, 501c3 preachers will be blind to key points in the prophecies because they have placed more importance on the money in their pockets than the souls in their care. Joining their churches and ministries with the second beast of Revelation means they are disobedient unto the Lord because the only way to understand prophecy is to obey the God that wrote it.

If the 2030 deadline for the New World Order set up by the Pope via the U.N. coincides with the final prophecies of our Lord, then it will be allowed to happen by 2030. But if it doesn’t coincide with the true prophetic date that only the Father knows, then it can happen earlier or a few years later. The fact they finally made it public means it will soon happen no matter what the date is. They are no longer hiding it. It’s a done deal because Satan knows his sin loving subjects of the world are finally ready for it. Even the hardened scoffer has to admit the prophecy is legit now.

By the way, for those that don’t really see what should be seen here; all I ask is that you keep what you just heard in mind in the coming days and then watch the Pope of Rome. Watch how he is promoted around the world to make him as popular as possible. I actually went into detail on this some time ago in that video I titled “The Wound is Healed” for those that want proof that this has already started. The Pope will become the global moral leader so as to help guide the ten kings as they rule in the New World Order as Caesar did in his day. The fact all government buildings already have Roman architecture will make it that much easier for some people to see the Pope as worthy to rule since their own elected officials erect monuments unto him. The fact all celebrates have saluted the Pope with their 666 hand signs and all the major corporations have placed 666 in their logos shows they too have joined in the prophesied promotion of the man of sin. One more thing everyone can see is that no one can buy anything without a bar code on it that is based on 666 which confirms the Pope has been exalted by Satan as a global ruler just as prophecy said he would be. In fact, even the high tech industry has joined in to declare the Pope and his kingdom worthy of worship. Click here for the new series of AMD CPU chips.

In short.. are you ready? ARE YOU SURE?!