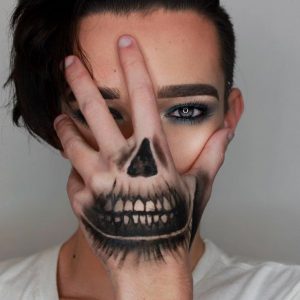 “Male makeup gurus are having a moment, and James Charles Dickinson is adding another. The 17-year-old YouTube sensation, known simply as James Charles on social media, boasts more than 70,000 subscribers, which comparatively isn’t as much as some other major male beauty YouTubers, like Manny Gutierrez (Manny Mua) and Patrick Starrr (both nearing 2 million each). –Source

This is just one more of many major signs that we are in the very last days. (click here ) for quite a few listed in detail) The immorality that is being promoted by the media and our elected leaders have caused the world to allow Satan to lower most of the people that follow his lead into the pits of hell so as to assure the overwhelming majority will not be ready for the return of our Lord, King, Saviour and Creator Jesus Christ. But then Jesus did say in Luke 18:8, “…when the Son of man cometh, shall he find faith on the earth?”   END_OF_DOCUMENT_TOKEN_TO_BE_REPLACED