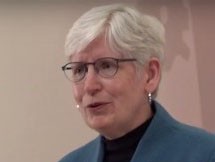 “Though Professor Catherine M. Wallace calls herself a Christian – one of the social justice variety – she claimed in  a lecture called “Confronting Fundamentalism” at the Seminary Co-op Bookstore on the campus of the University of Chicago that Christian fundamentalists pose a greater threat to our nation because they can somehow gain access to the nuclear codes. …Wallace believes that “Christian fundamentalist” violence is a threat because it stems from a literal reading of the Bible, which she claims is a modern aberration and that “nobody in the ancient world would have read the Bible literally.” –Source

Not only does this professor admit she is Roman Catholic, she declares with pride that she is a Jesuit trained Roman Catholic. And she does so directly after slamming who she calls fundamentalists. That by the way happens to be Rome’s pet name for all Christians that actually read and believe the Bible.

The article goes on to say, “Wallace goes on to say that “Christian fundamentalism is a malignant form of Christianity” because it fosters hate and conflict with the modern world. She prefers a Christian humanism, which essentially means that Christianity should sell out all its principles to become socially acceptable among the Manhattanites.” And that is exactly how Catholics view anyone outside the church of Rome.

But look around. Who is hated now-a-days? Bible believing obedient Christians, right? And who is loved? Everyone that says homosexuality is ok, Allah is God, divorce is ok and women should be allowed to be ordained as pastors. So the truth is, this woman is lying. The only fostering of hate and conflict comes from those that hate what Bible readers say and believe. Because common sense dictates that all obedient Christians are very loving towards their fellowman.

What’s really amazing (and expected) here is that because of the ecumenical charge of Rome, most now agree with this woman’s extra biblical claims. This has been obvious for many years in fact and it’s also the reason I posted the “Hating the Christian” page on the site many years ago. In fact, that page was an update to my July 2002 Newsletter, which was an update to my February 2002 WTPR broadcast!

The humanism of Rome, a term used by the present Pope dozens of times since he stepped up, is a twisted theology that declares everyone that puts the Bible on the back burner are good and trustworthy people no matter what religion or lifestyle they follow and those that read the Bible are hateful, and even dangerous as John Paul II stated back in 1999. That “popular Pope” actually stated that “The fundamentalist approach is dangerous, for it is attractive to people who look to the Bible for ready answers to the problems of life.” And why did he say that? It’s because he knew the exodus from the Roman Catholic church was growing fast due to people opening Bibles, reading them, and then actually leaving his church. In fact, this is why I left the Catholic church 30+ years ago.

Now for the clincher!

Such as these always have an agenda under their Roman robes. This Jesuit trained professor stated “On the subject of Jesus and where he would stand politically, she predictably envisions him as a sort of younger, sandaled Bernie Sanders: “Jesus was first a Jewish prophet reciting the Jewish rant in its standard edition, which is social justice, socio-economic justice. Care for widows and orphans, which is to say the unemployable. People who can’t earn their own living. And the just sharing of the world’s resources.”

She echoes John Paul II in regards to his hatred of fundamentalists to the point of calling us “dangerous.” She admits with pride she is trained by bloodthirsty Jesuits, and then she even goes so far as to echo the last three Popes to shore up her declaration that Jesus Christ is a Socialist! What’s really bad in all this is the fact that what she’s saying will be accepted by the masses just as easily as they did the ecumenicalism insanity since the 1960’s. As prophesied, evil has become good and good has become evil. Don’t believe me? Ask your pastors what he (or she) thinks about homosexuality, Allah, women pastors, alcohol, tobacco, scientifically proven cancerous (unclean) foods, premarital sex and joining the church in a 501c3 contractwith the prophesied second beast of Revelation, the United States of America just to name a few. If you’re a Bible believing child of God, you may not like what your pastor says in response to those pertinent questions. But then you need to hear his (or her) response so as to make sure you and you’re family are not in danger.

The basic reason she made the speech was to draw a very clear line between the Bible believing Christians and the long prophesied Isaiah 4:1 type of Christians we see today who only want to be called Christians to take away their shame while they party on reveling in sin. This line must be drawn for the prophesied troop selection for Armageddon to commence. And commence it has. What she’s doing is just shoring up the ranks to make sure all her cohorts are aware as to who the real enemy is. No, it’s not Islam. In fact she stated in the lecture that“Christian fundamentalists pose more danger to the internal security of the United States than Islamic terrorists pose.” True Christians have been the enemy of the State and of the Popes of Rome for centuries. This is why the Popes focused on killing as many of them as they could over the centuries.

Prophecy says we will be hated. It also says we will be surrounded by the wicked and the majority of those wicked will claim to be Christians just like this Jesuit trained Roman Catholic professor has claimed to be. She claims Christ as Lord yet at the same time lies about His love in His people who have the courage to warn the masses of their eternal plight. She, like all Jesuits and prelates is more concerned with helping Satan do as he needs to do so as to get their global mark enforced worldwide so as to affirm they have even more power. Well.. at least for a very short time that is. But then Satan won’t tell them about that.

And now that ALL the churches are controlled by Rome, and this includes the Seventh Day Adventist church, it won’t be long before the Loud Cry gets extremely loud and those on the wrong side of the fence get extremely upset. So be it! As prophesied, those obedient to the Lord who have the Latter Rain upon them will go forth with courage from on High and many souls will come out of Rome and then Satan himself will demand Sunday laws to shut us up because, as we have all seen for decades, the truth we preach CANNOT BE REFUTED using Scripture, and THAT is why Rome looks at us as more dangerous than Islam.