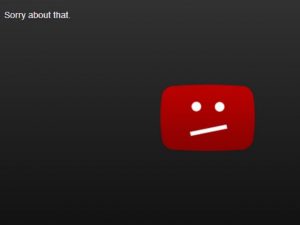 “YouTube’s algorithms, which are used to censor and demonetize videos on the platform, are killing its creators, according to a report. …In a statement, a YouTube spokesman attempted to defend the platform against criticism of increased demonetization. “Back in March we rolled out new controls for advertisers to help them better choose where their ads are placed, and we rely on machine learning to evaluate the millions of videos on our platform to implement those choices,” claimed the spokesman. “But no system is perfect, so we encourage creators to appeal for a human review when they feel we got it wrong, and every appeal helps our advertising systems get smarter over time.” –Source

Now that would be all well and good if in fact they were being honest with the press. But as we know, YouTube is owned by Google and Google is very much in bed with Rome, (their logo confirms that hands down) and we also know, and in my case firsthand no less, that Google likes to censor Christians and especially those Christians that share the Biblical facts most all the other churches refuse to share knowing it will upset their status quo.

And just so you know, the churches refuse to share for two main reasons. #1, being in agreement with the Pope and literally declaring him their leader in the one world church, they must do as the Vatican demands to stay in business and seeing how ALL the churches (including the SDA church) preach whatever the Vatican commands them to preach, to step off the path of agreement now would cause them much grief in the area of politics. And Google is one that can tighten the noose rather nicely in the online community if they refuse to bow to their agenda.

To openly tow the line for Rome is mostly an issue for the main stream churches and especially their main headquarters wherein we have all witnessed the last few decades alone how they have delved into politics in a big way. Doing so makes them money and it also keeps the Jesuits off their back. In fact, this may shock some of you, but the SDA church has become a major player in both politics as well as the Pope’s long prophesied World Council of Churches (WCC) even though their leaders have called the obedient Christians liars that exposed them as members of the WCC. But when the truth was finally posted online (see it here) many in the upper hierarchy of the SDA church clammed up knowing anyone with access to those doc files could destroy their lofty position in the church. And yes, they are a Vatican contrived hierarchy and even admit as such in writing. To see what I mean, click here, then type F3, and then type in “hierarchy” in the query to see for yourself. The fact the SDA church now has a major player and political pawn for Rome in Washington DC by the name of Ben Carson proves they have been very active in politics for many years. All they were waiting for was the church members to lower their biblical standards before pushing someone like Carson to run for political office.

As for point #2, yes you guess it. As is obvious, a main stream church wherein millions of tax-free dollars are funneled in each and every year via their many church members, church leaders like this won’t be walking away from that kind of many anytime soon no matter what the Bible says about it. And so Rome has no fear of them doing so. But what of all the other churches who don’t have as much skin in the game of politics and certainly nowhere near that kind of money? Rome needs to control them too do they not? This is where the prophesied 501c3 comes into play. The big guys, like the General Conference leaders worship that money and so even though they also have a 501c3, Rome knows they won’t demand a nullification of that contract even though they could easily afford to pay the millions of dollars in excise and penalty taxes. The SDA leaders like all the other main stream churches simply love that money too much. But the little guy who finds out about the prophesied facts surrounding the 501c3 cannot afford to pay those back taxes and penalties. And so like the big guys, they stay in obedience to Rome and therefore seal their fate.

And as for the claim that Google and their illegitimate child YouTube (YT) using an algorithm that has messed things up a bit; if that’s so, then why is it mostly Christians are losing subscribers and hits? Now yes we see other Youtubers losing their monetization due to the algorithm, but I have yet to see a single obedient Christian using monetization on YT. Because most, like myself included, never ask for donations on the pulpit. That being the case, how is it I keep getting emails daily about new subscribers on YT, yet the numbers keep going down in both my sub list as well as hit list? It’s because they’re lying like any other disobedient kid caught with their hand in the cookie jar.

Sure, they have an algorithm that needs some tweaking. That’s a no-brainer. But it seems they have another algorithm either running alongside it, or they have a team of Atheists who hate Christ targeting real Christians. The numbers simply don’t lie here. The fact they deleted a video of mine the other day that only had a few hundred hits, but left the exact same video on other YT pages that got hundreds of thousands of hits means real Christians are indeed being censored via any avenue Google owns. (See the 5 min video I made on that here)

Main reason for the post? It’s nice to see the alternative and more trusted media is exposing the corruption we Christians have been seeing with Google the last few years and YouTube recently. In fact, I made a few videos about YouTube on all this not too long ago and so this article is just icing on the cake for me. See six of those videos here.