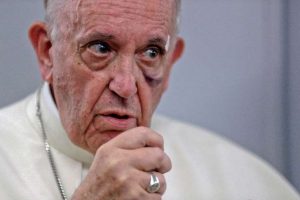 “Pope Francis on Monday slammed climate change doubters as “stupid” in the wake of a spate of hurricanes that have thrashed the US, Mexico and the Caribbean. “Those who deny it (climate change) should go to the scientists and ask them. They are very clear, very precise,” the pontiff said Monday during a press conference on the return leg of a five-day Colombia trip.” –Source

What this Jesuit Pope doesn’t seem to understand is that most people are not stupid when it comes to what he calls climate change because we are all on the same planet experiencing the weather changes. Yes, we had a few hurricanes, just as we do every year. And just so you know, those hurricanes were bad, yes. But they were not as bad as the media reported them to be. They are obviously pumping up the numbers to help the Pope in his long prophesied agenda regarding climate change. Check out this animation that compares hurricanes the last few decades. Irma, Harvey and Jose were large storms yes. But not THE largest. In fact, Matthew was much larger than Harvey, Jose and Irma, and Irma was only 15 miles wider than Katrina. And just so you know, Irma was 400 miles wide. But Sandy was 1120 miles wide literally engulfing Harvey, Irma AND Jose! In fact, you could fit another hurricane Harvey inside Sandy with 3 miles left over! But, Irma and Harvey got much more air time in the media than any other hurricane in history because we now have a Jesuit Pope who needs to do what Satan demands seeing how he knows his time is so short.

Plus, when the Pope says the “stupid” people should ask the scientists; he is actually talking about his small handful of paid off politically accurate scientists that prophecy declared would be very active in our day. What the Jesuit Pope doesn’t seem to realize is, the “stupid” people actually know when he says “climate change” he really means global warming. And everyone, including his own “scientists” know they messed up and picked the wrong scenario when Al Gore and Pope John Paul II got together to fabricate this whole thing decades ago so as to hide the truth about the soon to start 7 last plagues that are actually the end result of their agenda wherein they use the natural disasters as a way to enforce the mark of the beast. The fact Al Gore’s most recent movie flopped proves the “stupid” people know his previous movie spoke of some very scary things that were supposed to happen in nature by 2016 that never actually happened as he and Pope John Paul II predicted. The “stupid” people happen to be living on the same planet and so the lies were easily seen as just that, a bunch of lies. And so they changed their agenda to enforce their mark from “global warming” to “climate change” because they can no longer back up their bad science. Not even the Vatican’s pawns who claim to be scientists can effectively cover-up what Al Gore’s movie boldly failed on when it came to predicting the end results of their global warming.

One last thing. As I stated earlier, the Pope only has a small handful of puppets he calls scientists that back his claims. But the “stupid” people know all about the 31,487 Scientists that confirmed in writing that Global Warming is wrong. And DELINGPOLE stated quite recently that ‘Global Warming’ is a myth, according to 58 scientific papers published in 2017.

Now don’t get me wrong. Nature is running a little off kilter. But it is neither climate change, global warming or global cooling, (even though the present figures say the planet is actually cooling.) The planet has had its normal climate cycles since day one like any other planet in the Universe. But what we’re seeing now is not normal. It was prophesied to be this way right before Jesus returns to remove His bride from this sin sick world. And so, just as the mountain shook when the Lord descended upon it when He gave Moses the already understood Ten Commandments that have been the Law of the land in New Jerusalem long before mankind was created, the entire planet is convulsing as the day of His return draws nigh. And anyone that declares the end is not yet nigh as did Pope John Paul II back in 1998, that my brothers and sisters is the ultimate definition of “stupid.”